Just got a copy of this new book from Prof. Dan Drezner (yes, it’s real). An image, and an excerpt (some paragraph breaks added): 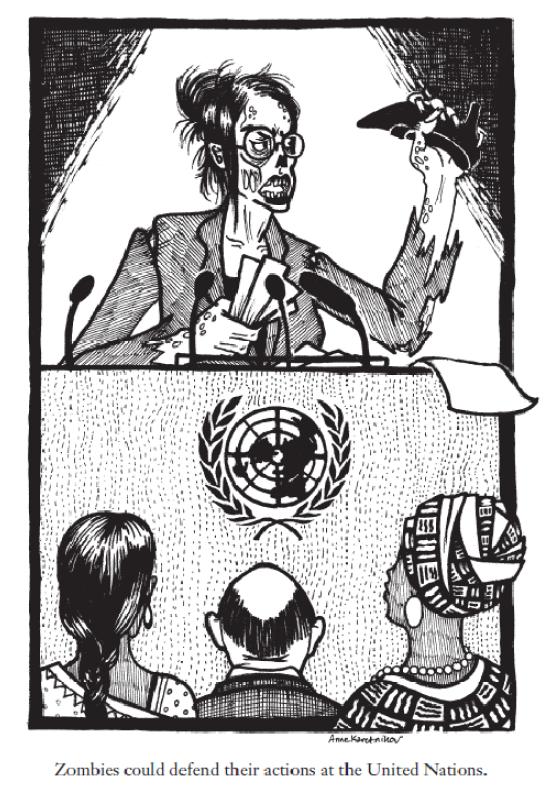 Some realists would go further, arguing that, in the end, human-zombie alliances of convenience would be just as likely to emerge as human-human alliances. As previously noted, many zombies in the canon start out possessing strategic intelligence, making them more than capable of recognizing the virtues of tactical agreements with some humans.

Some zombie studies scholars might object at this point, arguing that flesh-eating ghouls can neither talk nor develop strategic thought. Even if they did not, though, realists would point to Romero’s zombies for empirical support. Even in Night of the Living Dead, Romero’s ghouls demonstrated the capacity for using tools. In each of his subsequent films, the undead grew more cognitively complex.

The zombie characters of Bub in Day of the Dead and Big Daddy in Land of the Dead were painted with a more sympathetic brush than most of the human characters. Both Bub and Big Daddy learned how to use firearms. Bub was able to speak, perform simple tasks, and engage in impulse control—that is, to refrain from eating a human he liked. Big Daddy and his undead cohort developed a hierarchical authority structure with the ability to engage in tactical and strategic learning. In doing so they overran a well-fortified human redoubt and killed its most powerful leader. It would take only the mildest of cognitive leaps to envision a zombie-articulated defense of these actions at the United Nations.

By the end of Land of the Dead the lead zombie character and the lead human character acknowledge a tacit bargain to leave each other alone. This is perfectly consistent with the realist paradigm. For zombies to survive and thrive, they must avoid losing their brains — like humans, they also must adapt to the rigors of anarchy in world politics. While some emerging zombie governments might pursue radical anti-human policies at first, the anarchical system would eventually discipline a moderation of views.

In a world of sophisticated zombies, alliances between human states and zombie states are possible. Indeed, any government that tried to develop a grand coalition targeting the undead would immediately trigger the security dilemma. Realpolitik states could exploit any move toward an idealistic global war on zombies by creating temporary alliances of convenience with emerging ghoul governments.

A more passive strategy would be to encourage what John Mearsheimer labels “bait and bleed” and “bloodletting” strategies. In these instances, realist states would try to foment conflict between anti-zombie states and the ghouls themselves, profiting at the relative losses incurred by both sides.

Realists would advocate noninterference in how zombie states treated their own living and undead populations. In the end, realists would conclude that there would be little intrinsic difference between human states and zombie states. Human beings have an innate lust for power in the realist paradigm; zombies have an innate lust for human flesh. Both are scarce resources.

Regardless of individual traits, domestic institutions, or variations in the desire for living flesh, human and zombie actors alike are subject to the same powerful constraint of anarchy. Both sets of actors would engage in strategic opportunism to advance their interests in anarchy. The fundamental character of world politics would therefore remain unchanged. In the end, realists would caution human governments against expending significant amounts of blood and treasure to engage in far-flung anti-zombie adventures — particularly blood.

—–
† The very first zombie we see in Night of the Living Dead uses a rock to break into Barbara’s car.
* Some realists would no doubt warn against the power of a “human lobby” to blind governments from their national interests.

Is It Libel to Say Someone Was Convicted of a Crime When the Conviction Has Been Expunged?
Judge Vinson rules federal health control unconstitutional