But as to many of these arguments (see some in this thread), Morse is often not very relevant, much less binding. One premise of the Morse majority is that the speech wasn’t “political”:

Two of the five Justices in the majority (Justices Alito and Kennedy) stressed this in the very first paragraph of their opinion:

I join the opinion of the Court on the understanding that (a) it goes no further than to hold that a public school may restrict speech that a reasonable observer would interpret as advocating illegal drug use and (b) it provides no sup-port for any restriction of speech that can plausibly be interpreted as commenting on any political or social issue, including speech on issues such as â€œthe wisdom of the war on drugs or of legalizing marijuana for medicinal use.â€

What’s more, three of the four dissenters agreed: “This is a nonsense message, not advocacy.”

Now, as I argued when the decision came down, I think the Justices were wrong to say that Frederick’s message was nonsense, or even just nonpolitical. The majority said “BONG HiTS 4 JESUS” “could be interpreted as an imperative … ‘smoke marijuana’ or ‘use an illegal drug,'” or “as celebrating drug use — ‘bong hits [are a good thing],'” two messages that the majority saw as constitutionally indistinguishable. But these messages indeed “can plausibly be interpreted as commenting on any political or social issue”: They implicitly suggest that drug laws are a bad idea (“violate law X” often tends to suggest that, especially as to laws that are quite controversial), which is a comment on a political issue. And they suggest that drug use is a good idea, which is a comment on a social issue.

Yet while the Court applied its own test incorrectly to these facts, it hardly follows that it should apply its own test incorrectly to other facts as well, especially ones that are quite far removed from these. Perhaps Morse supports the view that highly opaque statements might be seen as nonpolitical. Perhaps it supports the view that mere advocacy of illegal conduct is nonpolitical, though I think that is inconsistent enough with the rest of the Court’s precedents that I don’t think it’s right to read Morse even that broadly.

But surely the T-shirt below (to give the example that triggered this post) clearly “can plausibly be interpreted as commenting on any political or social issue”: 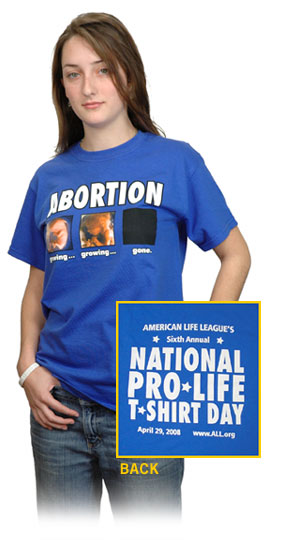 It is saying that abortion is immoral, so people shouldn’t engage in it. And it is probably also saying that it is so immoral that abortion should be legally restricted. (That abortion is currently constitutionally protected doesn’t matter: That just means that legally restricting it would require either electing Presidents who appoint enough Justices who would hold that abortion is constitutionally unprotected, or enacting a constitutional amendment to the same effect — politically quite difficult, especially at this point, but certainly calls for this are political speech. Plus of course even if abortion can’t be entirely banned, it can be restricted in various ways, which the T-shirt likely implicitly calls for as well.)

Now indeed if the T-shirt said something like “Kill abortionists,” then perhaps the Morse analogy would govern. I would still say that such a statement is political speech and thus Morse shouldn’t apply, but I can see the argument that statements in Morse distinguish, in the K-12 public school context, between advocacy of illegal conduct and advocacy of changing the law (or changing social attitudes). But nothing in Morse would extend to the T-shirt mentioned above.

I can understand why many people are upset at Morse. I can also understand why many people like Morse and wish it had gone further, perhaps (as Justice Thomas suggested) to give K-12 school administrators blanket authority to restrict student speech. But if we’re looking at what the language of Morse actually means, it seems to me that we need to acknowledge that it’s distinctly limited in its scope.

Anti-Defamation League Regional Director Asserts That “Freedom of Speech Does Not Extend to Racist Groups”:
Pipe Bombs Unprotected by the Second Amendment: