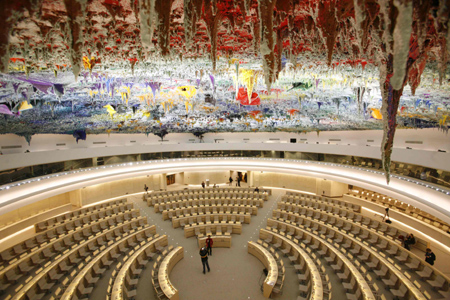 The New York Times reports on budget season at the UN and various battles hotting up.  It’s a good piece by Neil MacFarquhar, dated November 7, 2009.  As the article says, that fact that

it costs the United Nations an average of $2,473 per page to create every single document in its six official languages, while outside contractors complete the same work for around $450, prompts diplomats to accuse the organization of running amok during a global financial crisis.

It goes on to discuss the practicalities of the negotiations among the diplomats – the multiple sources of conflicts.  It is well sourced – as the article says, anonymous sourcing, understandable under the conditions – from many diplomats and explains the process by which the budget is reached.  The conflicts?  They include the perennial fight between the large majority of states that don’t pay and the minority that do; the amount that BRICs (Brazil, Russia, India, China) pay in relation to wealthy but smaller GDP states such as Canada; objections to UN Secretariat add-ons; there are others.

In any case, whatever one’s view, I’m always surprised by how many experts and partisans of the United Nations are uninterested in its internal budget and money issues.  Paul Kennedy wrote an entire book in praise of the UN, but preferred to stay either in the diplomatic histories of 1945 or up in the clouds of The Parliament of Man – he did not manage to devote even a page to money and budget issues.  That is my experience with most academic UN observers; there are important exceptions, usually people like John Ruggie who have been UN officials, but it mostly holds true; academics tend not to be interested in the accounting and financing.  The basic rule, follow the money, does not seem to apply to the UN – meaning, follow-the-money as a fundamental, obvious way of explaining the UN.  So much for historical materialism?

The reasons are complicated, but include a combination of the distaste of those who follow public law and organizations for accounting combined with a sense that what matters is not the money but the grand ideals of the institution.  ‘UN platonism’, as Michael Glennon once memorably called it.

Indeed, when one raises even a handful of the many, many scandals surrounding the UN and money, the reaction among international law observers tends to be, in my experience, not shock and a resolution that the organization needs to be better held to account, but a general sense that those who dwell on the sordid details are somehow demeaning the institution.

(Who among international law academics, for example, followed the saga of the $23 million (!) ceiling mural in the chambers of the Human Rights Council in Geneva – unveiled in 2007?

I’m in favor of public art and spending money on it, even at the UN.  Then there’s the kind of extravagance one might hope would cause, say, special rapporteurs and the US delegation and the NGOs that pressed for the embarrassment of the Council to replace the Commission in 2005 to stare up at the ceiling during meetings and think about what $20 million of that $23 million would do for World Peace or Human Rights or something.  The UN’s Climate Adaptation Fund, for example, which started in 2008 to help poor nations with climate change issues currently $18 million – not enough to pay for the current round of Copenhagen talks.

I mentioned it at a couple of academic meetings offhand, and the audience comments were that I was either mistaken or merely expressing hostility, because the only people who had talked about this (in English, anyway) were FoxNews and UNWatch, or that it was unworthy to dwell on such minor things.  If you looked at these kinds of issues, you were mistaking the forest for the trees.)

Whereas I would have said that after a certain point, these apparently minor details tell you about the nature of the organization, especially when it is an organization that has so little capacity to address even questions of embezzlement, fraud, or similar crimes.  So when it just comes to spending 23 million dollars on a mural – that is, “mere” mismanagement of financial resources – yes, I think it tells you something about the nature of rent-seeking and organizational priorities.  Particularly when it turns out that Spain – it was a Spanish artist doing the HRC ceiling – apparently raided its international development budget to help pay for “the Sistine Chapel of the 21st century.”  I think it does tell you something about incentives, motivations, public choice, institutional capture, and many other things that give a far better understanding of the organization than one gets by reading the UN Charter or the academic literature.

These are big questions, after all.  The reason why the organization can’t address corruption has largely to do with the protection that member states offer to their citizens, for example, which tells you something about the way in which states view the organization and themselves.  The reason why, for example, international development NGOs or even, come to it, human rights NGOs, did not make an immense ruckus over 23 million dollars that could have been spent on some Jeff Sachs development project tells you something about the relationship of the NGOs to the UN, and the other way around.  Or possibly how the “actually existing UN” actually feels about Professor Sachs’ MDGs, when it comes to the organization’s own budget priorities.  Why it is that the Secretary General couldn’t actually fire anyone even if he wanted, or why so many of the senior staff make well in excess of, for example, what the US Secretary of State makes, well, all of that is not a matter of minor details – why sweat the small stuff, we’re told, when the organization is about the glories of global governance? – but instead tells you crucial information about agency failure, institutional capture, public choice, rent-seeking, and the internal dynamics that those who focus on The Parliament of Man never quite want to know about.

(Update:  Thanks Glenn for the Instalanche!  I should add that I am finishing a book on this subject, Returning to Earth: When and How the United States Should Engage, and Not Engage, with the United Nations.  My editors have shown the patience of saints, but I am finally finishing the darn thing.  Meanwhile, part of it is an this SSRN paper on the parallel global security systems provided by the US and the UN, as well as the one linked above on The Parliament of Man.  And then there is this discussion of legitimacy, global civil society, and the United Nations, which will be appearing as a book chapter soon, but here is a working version at SSRN.  I’ve also added the photo of the HRC mural – it seemed to be in the public domain.)

Survey of American Jewish Language and Identity
Against Climate McCarthyism