The radical Islamic Web site Revolutionmuslim.com is going after the creators of the TV cartoon series “South Park” after an episode last week included an image of the Prophet Mohammed in disguise. . . .

On Sunday, Revolutionmuslim.com posted an entry that included a warning to South Park creators Trey Parker and Matt Stone that they risk violent retribution – after the 200th episode last week included a satirical discussion about whether an image of the prophet could be shown. In the end, he is portrayed disguised in a bear suit.

The posting on Revolutionmuslim.com says: “We have to warn Matt and Trey that what they are doing is stupid and they will probably wind up like Theo Van Gogh for airing this show. This is not a threat, but a warning of the reality of what will likely happen to them.”

. . . The posting on Revolutionmuslim.com features a graphic photograph of Van Gogh with his throat cut and a dagger in his chest.

The entry on Revolutionmuslim.com goes on to advise readers:

“You can contact them [the makers of South Park], or pay Comedy Central or their own company a visit at these addresses …” before listing Comedy Central’s New York address, and the Los Angeles, California, address of Parker and Sloane’s production company. . . .

Over still photographs of Parker, Stone, van Gogh and others, the Web site runs audio of a sermon by the radical U.S.-born preacher Anwar al-Awlaki, who is now in hiding in Yemen. The sermon, recorded some time ago, talks about assassinating those who have “defamed” the Prophet Mohammed – citing one religious authority as saying “Harming Allah and his messenger is a reason to encourage Muslims to kill whoever does that.” . . .

The clip ends with a warning on a graphic directed at Parker and Stone, saying “The Dust Will Never Settle Down.”

Though such a purported warning would meet the requirements for a “threat” under some cases, I suspect that some courts would not go so far, especially for religiously or politically motivated speech. It’s a close case. 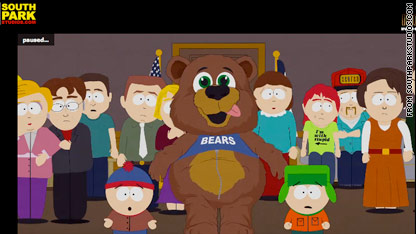 On the nature of threats, in my 1984 article, Unraveling the Paradox of Blackmail, I had a footnote that mentioned some cases involving indirect threats:

Under most statutes the threat may be communicated in any fashion, oral or written, explicitly or by innuendo. See Cape v. United States, 283 F.2d 430 (9th Cir.1960) (threat of damage to property was made merely by mentioning troubles that other contractors had had); People v. Massengale, 10 Cal.App.3d 689, 89 Cal.Rptr. 237 (1970) (no explicit threat was made, though behavior was menacing in obtaining contracts from elderly women to trim trees); People v. Oppenheimer, 209 Cal.App.2d 413, 26 Cal.Rptr. 18 (1962) (prisoner’s inquiry in a letter whether judge’s windows were insured constituted threat within extortion statutes, where threats were coupled with a demand that the judge pay the fines the prisoner had incurred); Iozzi v. State, 5 Md.App. 415, 247 A.2d 758 (1968) (threat was conveyed by pointing out what happened to another business, which had been bombed); . . . 31 Am.Jur.2d Extortion, Blackmail, and Threats § 10, at 907-08.

2D UPDATE: After posting, I edited the CNN excerpt for length.