Incredibly (and stupidly), Israeli officials believed the protesters’ claims that they were mere humanitarian peace activists with no violent intent (in fairness to both Israel and the protesters, it appears that the violent passengers were on only one of six boats). An embedded reporter with YNet News sets the scene:

Officials estimated that passengers will show slight resistance, and possibly minor violence; for that reason, the operation’s commander decided to bring the helicopter directly above the top deck. …

Navy commandoes slid down to the vessel one by one, yet then the unexpected occurred: The passengers that awaited them on the deck pulled out bats, clubs, and slingshots with glass marbles, assaulting each soldier as he disembarked. The fighters were nabbed one by one and were beaten up badly, yet they attempted to fight back.

However, to their misfortune, they were only equipped with paintball rifles used to disperse minor protests, such as the ones held in Bilin. The paintballs obviously made no impression on the activists, who kept on beating the troops up and even attempted to wrest away their weapons.

One soldier who came to the aid of a comrade was captured by the rioters and sustained severe blows. The commandoes were equipped with handguns but were told they should only use them in the face of life-threatening situations. When they came down from the chopper, they kept on shouting to each other “don’t shoot, don’t shoot,” even though they sustained numerous blows.

The Navy commandoes were prepared to mostly encounter political activists seeking to hold a protest, rather than trained street fighters. The soldiers were told they were to verbally convince activists who offer resistance to give up, and only then use paintballs. They were permitted to use their handguns only under extreme circumstances.

The planned rush towards the vessel’s bridge became impossible, even when a second chopper was brought in with another crew of soldiers. “Throw stun grenades,” shouted Flotilla 13’s commander who monitored the operation. The Navy chief was not too far, on board a speedboat belonging to Flotilla 13, along with forces who attempted to climb into the back of the ship.

The forces hurled stun grenades, yet the rioters on the top deck, whose number swelled up to 30 by that time, kept on beating up about 30 commandoes who kept gliding their way one by one from the helicopter. At one point, the attackers nabbed one commando, wrested away his handgun, and threw him down from the top deck to the lower deck, 30 feet below. The soldier sustained a serious head wound and lost his consciousness.

Only after this injury did Flotilla 13 troops ask for permission to use live fire. The commander approved it: You can go ahead and fire. The soldiers pulled out their handguns and started shooting at the rioters’
legs, a move that ultimately neutralized them. Meanwhile, the rioters started to fire back at the commandoes.

UPDATE: Have trouble believing Israeli officials could be so naive? Back during the Second Intifada, I was talking to a reporter who consistently referred to International Solidarity Movement activists as “peace activists.” I told him that he should call them what they are, Pro-Palestinian activists, if they were “peace activists” they would be riding Israeli buses targeted by bomb attacks as well as accompanying Palestinian demonstrators. He responded, “you know, you’re right, but the Israeli soldiers I deal with call them ‘peace activists’ so I just adopted their lingo.” I guess it’s a lot easier to believe that your enemies are just naive peace activists than that they hate you and want you dead. Israel can’t afford such naivete, as today’s violence suggests. Anyone involved in planning this fiasco’s head should roll.

FURTHER UPDATE: A “peace activist” aboard the ship, courtesy of Pajamas Media. Note the rather large, sharp dagger, perfect for, oh, spreading hummus or something. 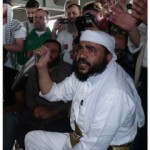 And here’s the ever prescient Juan Cole, last seen predicting that Israel would use the 2006 war in Lebanon to permanently depopulate the south of the country, on what he calls the “peace activists” before the video above was released: “There are two possible reasons for the violence. One is that the Israeli troops boarding the vessels met some sort of resistance and over-reacted. Aid volunteers are unlikely, however, to have posed much real challenge to trained special forces operatives.” Or, more likely, “the deaths and woundings may have been a brutally frank warning to any future Gaza aid activists.”

And finally: Look, if you think that Israel’s blockade of Gaza is illegitimate, and the “Free Gaza” movement has the moral or legal right to ship whatever materials it wants there and to use whatever violence is necessary to resist Israeli attempts to stop them, neither this video, nor anything I am going to post here, is going to persuade you otherwise. But the Free Gaza folks and their supporters (Juan, call your office) have portrayed the violence today as an unprovoked Israeli massacre of nonviolent civilian peace activists. I think the video above pretty much rebuts that story.

Meanwhile, why is the N.Y. Times still repeating this nonsense on its website, without pointing out that it’s contradicted by video evidence?:

Greta Berlin, a leader of the pro-Palestinian Free Gaza Movement, speaking by telephone from Cyprus, rejected the military’s version.

“That is a lie,” she said, adding that it was inconceivable that the civilian passengers on board would have been “waiting up to fire on the Israeli military, with all its might.”

“We never thought there would be any violence,” she said.

FURTHER UPDATE: Glenn Greenwald, showing his usual perspicacity about all things Israeli, still has on his website, without correction: “Those on the ships emphatically state that the IDF came on board shooting.” But cf. video above. Nothing like useful idiots to help you with your propaganda, but at least we have a documentary record of Greenwald’s credulity. (Greenwald has now updated his post to add a caveat, without acknowledging that he did so.)