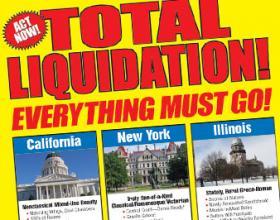 UPenn law professor and corporate finance and bankruptcy specialist David Skeel has an important article in this week’s Weekly Standard talking about the possibility and utility of bankruptcy for states.  The article argues first that a new chapter for states in the Federal bankruptcy statute would be constitutional, and then turns to argue, second, that the benefits to the public would be considerable:

When taxpayer-funded bailouts are inserted into the equation, the case for a new bankruptcy chapter becomes overwhelming. And it’s a case for Congress to move now on the creation of a state bankruptcy law.

With the presidential election just two years away, the pressure to bail out California, Illinois, and perhaps other states is about to become irresistible. As we learned in 2008 and 2009, it is impossible to stop a bailout once the government decides to go this route. The rescue of Bear -Stearns in 2008 was achieved through a “lockup” of its sale to JPMorgan Chase that flagrantly violated corporate merger law. To bail out Chrysler and General Motors, the government used funds that were only authorized for “financial institutions,” and illegally commandeered the bankruptcy process to give the car companies a helping hand. There is, in short, no law that will stop the federal government from bailing out profligate state governments like those in California or Illinois if it chooses to do so.

The appeal of bankruptcy-for-states is that it would give the federal government a compelling reason to resist the bailout urge.

This is an important piece of public advocacy by a leading scholar, agree or disagree with its two main contentions, and repays close reading.  (The illustration above is a thumbnail from the WS.)

Update:  Thanks, Glenn, for the Instalanche – but also for the very interesting updates at Insta, including some important comments and emails that I encourage VC readers to check out.

Also, Co-Conspirator Todd notes above the Stanford Law School conference on the Constitution and the Financial Crisis, at which both he and I spoke a couple of weeks ago.  It was a great conference, and CSPAN, as he notes, has put online a couple of the sessions.  One of them includes a discussion of bankruptcy and the auto bailout, and the lineup includes both Todd and David Skeel, UPenn professor and author of the above Weekly Standard article.

I have not tried to comment on the constitutional questions, as I do not have the expertise to do so.  But I wanted to make a different kind of point about bankruptcy processes that involve quite important areas of judicial discretion – equitable discretion in a generic sense – within a given structure of rules that can force creditor-parties who otherwise would not be likely to overcome collective action problems to come together.  Leaving aside constitutional questions that I am not competent to address, I favor as a policy matter something like Professor Skeel’s position.  Likewise, I favored bankruptcy as the proper process in the auto bailouts, among others.

That said, I express one caution (I’ve put up a longer version of it as a separate, later VC post).  When in a crisis, or contemplating responses to crises, we naturally look around and see an existing mechanism that seems to have worked pretty well.  Bankruptcy judges and courts, for example, in parts of the financial crisis.  We think that they have worked out pretty well how to cabin judicial equitable discretion in these matters within rules, precedents, codified law, etc.  So we collectively think, let’s assign them this big new thing – sure, it’s kind of a stretch (such as bankruptcy for states), but these mechanisms and actors have a stable procedural path that has been well worked out and well trod.

The risk here is that we do not take into account the way in which the addition of this new social and political and legal task is not just stretching existing institutions – taking on these new functions involves addressing whole new categories.  Bankruptcy of sovereign entities, for example.  It is categorically different, and has the effect of altering the nature of judging, because it just is, by its nature, political in way that no commercial activity is.  It alters the nature of discretion, the role of the judges, and how the judges see their role – how they cabin their discretion within a body of rules.  It alters the terms of legitimacy when they shift from purely commercial and private players to sovereign actors.

Now, I describe this as a risk and I perhaps overstate by calling it a category rather than a stretch.  After all, municipalities have been in these processes before, and states have defaulted before, and so an existing system might well simply grow into this role without warping it out of identification.  But it is a risk.  At a minimum, it should not be assumed that the mechanisms established by law for dealing with private actors within a structure of sovereign law can automatically work with sovereigns themselves, without altering the notion of “cabined discretion.”

Finally, note that this problem is by no means limited to this kind of financial crisis and bailout problem.  The same conceptual problem arises whenever judges are proposed to be tasked with some kind of new activity – precisely because we think that they embody both legitimacy and discretion.  Discretion that carries legitimacy because it is limited in many ways.  Think about arguments that we could have federal judges giving advance and necessarily secret review of targeting decisions for drone warfare attacks; or issues related to detention and rendition before the fact; or many other related issues.

The assumption is that judges have this legitimate discretion as an attribute of being a judge and that it can be carried around from political activity to political activity as an independent quality.  But of course it does not work that way.  Legitimacy, and equitable discretion that carries legitimacy, is a function of the activity and how it is not just legally, but also socially and culturally embedded with particular structures of law and sovereignty.  The exercise of those powers in ways that are alien to the terms of the judiciary – a judicial function that is embedded within the domestic structure of constitutional law, not a writ that runs to the world, to start with – seems to me inevitably to shift the nature and self-perception of the judiciary itself.

Judges start out reviewing national security decisions; they are gradually drawn in, as one speculative possibility, to police and enforce some rights concepts, until a bunch of Americans get blown up; and eventually the judges see themselves as being the political actors who make the decisions about the tradeoffs between security and liberty.  The judges that result from that process will not be the same, in their self-perception or legitimacy, as the judges that preceded it.

These are risks, not certainties.  But whether in the national security area or the financial crisis area – I draw here on some of Eric Posner’s comments at the Stanford conference on comparisons between the two – one must take appropriate account of the dynamic social nature of the process by which one assigns activities to actors that are attractive because they have discretionary authority and the legitimacy to exercise it.  The exercise of that authority changes with its exercise in new venues – and in ways that one might not anticipate or particularly want.