Yesterday, the Tenth Circuit voted 5-4 not to rehear the Utah roadside cross memorial case, American Atheists, Inc. v. Duncan. The result, and the forceful dissents from denial of rehearing en banc, make it likely that the Supreme Court will agree to hear the case, and perhaps overturn the Establishment Clause endorsement test. I blogged about this in August, when the panel opinion was handed down, but I thought I’d repeat that post, with a few elaborations. 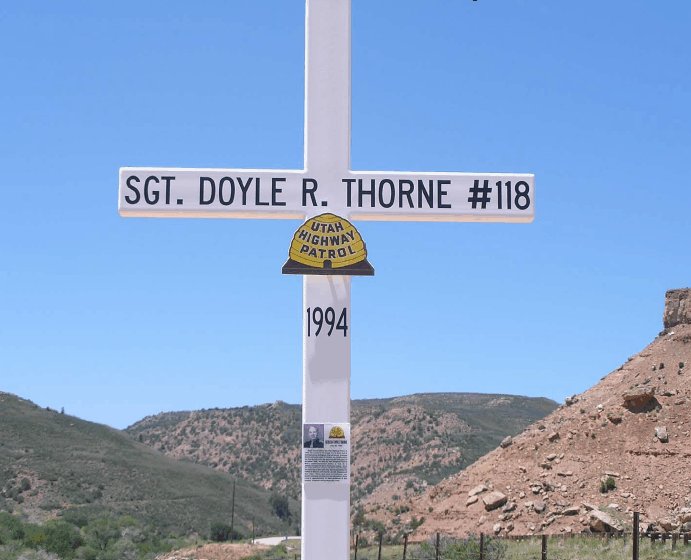 The case involves Utah Highway Patrol’s practice of allowing twelve-foot-high crosses as roadside memorials for fallen troopers (see the picture above). The practice, the panel held, violated the Establishment Clause because it had the effect of endorsing Christianity.

The goal of avoiding governmental endorsementdoes not require eradication of all religious symbols in the public realm. A cross by the side of a public highway marking, for instance, the place where a state trooper perished need not be taken as a statement of governmental support for sectarian beliefs. The Constitution does not oblige government to avoid any public acknowledgment of religion’s role in society. Rather, it leaves room to accommodate divergent values within a constitutionally permissible framework.

Both dissenting opinions (including one by Judge Neil Gorsuch, who worked part-time in Justice Kennedy’s chambers when he was a law clerk for retired Justice White) mentioned this passage. So I suspect the Justices are likely to take the case, which doesn’t have the procedural complexities of this year’s Mojave cross case (Salazar v. Buono).

One possible complication is that Justice Scalia’s latest extended critique of the endorsement test (in McCreary County v. ACLU (2005)) suggested that symbols that appear to favor Christianity might be unconstitutional even under his view, given his understanding of American traditions from the Framing on (recall that Justice Scalia generally thinks that historical practice is controlling in interpreting ambiguous constitutional provisions):

Besides appealing to the demonstrably false principle that the government cannot favor religion over irreligion, today’s opinion suggests that the posting of the Ten Commandments violates the principle that the government cannot favor one religion over another. That is indeed a valid principle where public aid or assistance to religion is concerned, or where the free exercise of religion is at issue, but it necessarily applies in a more limited sense to public acknowledgment of the Creator. If religion in the public forum had to be entirely nondenominational, there could be no religion in the public forum at all. One cannot say the word “God,” or “the Almighty,” one cannot offer public supplication or thanksgiving, without contradicting the beliefs of some people that there are many gods, or that God or the gods pay no attention to human affairs. With respect to public acknowledgment of religious belief, it is entirely clear from our Nation’s historical practices that the Establishment Clause permits this disregard of polytheists and believers in unconcerned deities, just as it permits the disregard of devout atheists. The Thanksgiving Proclamation issued by George Washington at the instance of the First Congress was scrupulously nondenominational — but it was monotheistic. In Marsh v. Chambers, we said that the fact the particular prayers offered in the Nebraska Legislature were “in the Judeo-Christian tradition” posed no additional problem, because “there is no indication that the prayer opportunity has been exploited to proselytize or advance any one, or to disparage any other, faith or belief.”

Historical practices thus demonstrate that there is a distance between the acknowledgment of a single Creator and the establishment of a religion. The former is, as Marsh v. Chambers put it, “a tolerable acknowledgment of beliefs widely held among the people of this country.” The three most popular religions in the United States, Christianity, Judaism, and Islam — which combined account for 97.7% of all believers — are monotheistic. All of them, moreover (Islam included), believe that the Ten Commandments were given by God to Moses, and are divine prescriptions for a virtuous life. Publicly honoring the Ten Commandments is thus indistinguishable, insofar as discriminating against other religions is concerned, from publicly honoring God. Both practices are recognized across such a broad and diverse range of the population — from Christians to Muslims — that they cannot be reasonably understood as a government endorsement of a particular religious viewpoint.

I suspect Justice Scalia might conclude that this does not make the crosses unconstitutional, because in context the crosses would be seen as memorial symbols and not endorsements of Christianity as such. (See here for an earlier discussion of the subject.) But his McCreary County analysis does make this a more difficult matter, especially since one of the arguments for jettisoning the endorsement test is that the inquiry into whether a reasonable observer would perceive something as endorsement is so vague; replacing it with an inquiry into whether a reasonable observer would perceive that something as endorsement of Christianity (as opposed to Judeo-Christian-Muslim monotheism) wouldn’t do much to avoid the problem. So this might lead him and some of the other conservative Justices to view this case as a less-than-optimal vehicle for revisiting the endorsement test. Still, on balance I think it’s pretty likely that the Court will take the case, reverse the Tenth Circuit, and use the opportunity to reject the endorsement test that a majority of the Justices dislike.

Thanks to How Appealing for the pointer. Note that Mayer Brown colleagues Evan Tager, David Gossett, and Brian Willen filed an amicus brief in this case on the plaintiffs’ side, but I wasn’t involved with the brief, and didn’t even know of it until shortly after the panel opinion.