I am in transit and can’t comment on this now, but Ian Ayres offers this post via Freakonomics blog and Balkinization on war-time bribes to officers on the other side to switch sides or not fight.  Thoughts?  (Update:  I hope these links work now to the original articles.)

I have a mildly technical and pedagogical question … in what sense are these bribes “Coasean?”  If you wanted to use this as an example for a 1L class on law and economics, how would you explain this clearly and non-technically as being “Coasean”?  How might you formulate this as a final exam question for 1L Law and Economics.  No, I’m not going to use a question formulated on a blog post on the actual exam, but maybe as a sample question on how Coasean reasoning can be applied to things that 1Ls might not have imagined.  So I have this nagging pedagogical question – in what sense are these bribes “Coasean” – and that being so, what assumptions are being made about the nature of the bargaining situation to make it consistent with the three standard assumptions about Coase bargaining?

Kristof had previously suggested that the U.S. should assure safe passage for Libyan defectors.

But the officer’s story reminded me of an alternative, more economic, incentive deployed in Iraq, where the U.S. offered defecting officers cash to lay down their arms. As reported by Fred Kaplan in Slate in 2003:

A fascinating piece in the May 19 Defense News quotes Gen.Tommy Franks, chief of U.S. Central Command, confirming what had until now been mere rumors picked up by dubious Arab media outlets—that, before Gulf War II began, U.S. special forces had gone in and bribed Iraqi generals not to fight.

“I had letters from Iraqi generals saying, ‘I now work for you,’ ” Franks told Defense News reporter Vago Muradian in a May 10 interview.

The article quotes a “senior official” as adding, “What is the effect you want? How much does a cruise missile cost? Between one and 2.5 million dollars. Well, a bribe is a PGM [precision-guided munition]—it achieves the aim, but it’s bloodless and there’s zero collateral damage.”

A “Smart Bribe” can be a lot cheaper than a “Smart Bomb.”

Gideon Parchomovsky and Peter Siegelman (friends and coauthors) have published a fascinating article detailing the pros and cons of bribing enemy combatants to switch sides.

Ayres includes a chart from the Parchomovsky and Siegelman article that walks historically through instances of such bribes in wars in the past and the results; I’ll stick it below the fold, but you can get a more readable view at Ayres’ original post. 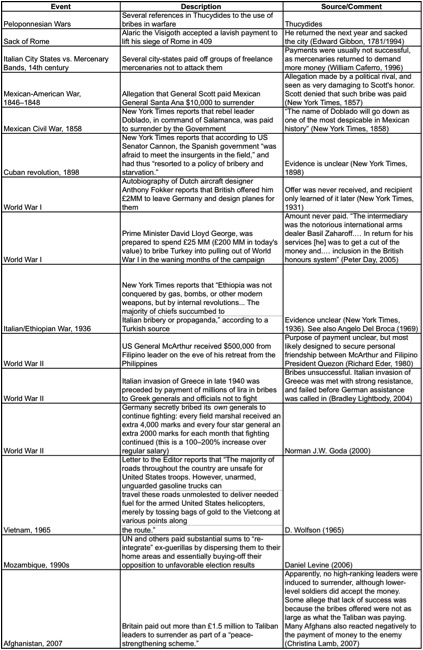