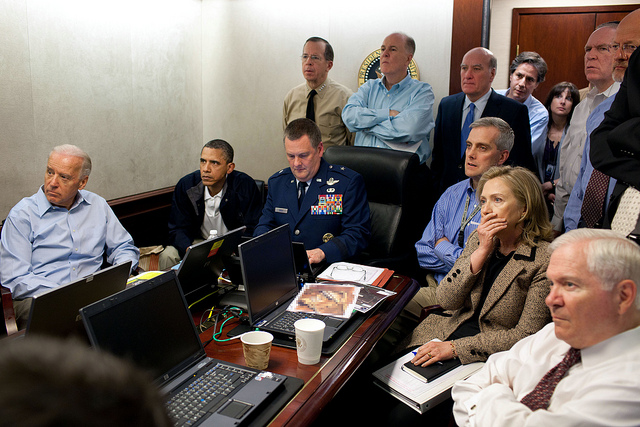 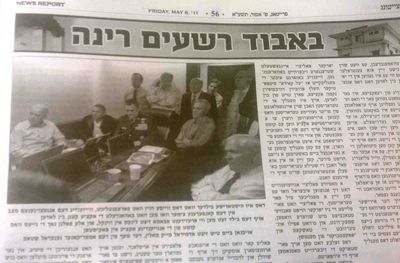 Prof. Howard Friedman (Religion Clause) has the story, with links:

In a strict reading of Jewish laws on modesty, the Hasidic newspaper Der Tzitung, published in Brooklyn, has a policy that it will not publish photos of women. The Washington Post reported yesterday on the controversy that this has stirred when the paper altered the now-famous photo of Hillary Clinton, the President and others in the White House situation room watching the progress of the mission that killed Osama bin Laden. The paper’s version (shown by Failed Messiah blog) removed Hillary Clinton and the only other woman in the photo, Audrey Tomason. It turns out that this violates the White House terms distributed with the photo that: “The photograph may not be manipulated in any way….” Der Tszitung has issued a statement (full text from Washington Post) reading in part:

The First Amendment to the Constitution guarantees freedom of religion…. In accord with our religious beliefs, we do not publish photos of women, which in no way relegates them to a lower status. Publishing a newspaper is a big responsibility, and our policies are guided by a Rabbinical Board. Because of laws of modesty, we are not allowed to publish pictures of women, and we regret if this gives an impression of disparaging to women, which is certainly never our intention. We apologize if this was seen as offensive.

Well, yes, they do have the First Amendment right to refuse to publish photos of women. Nor do I think the White House terms are likely to preclude that, since the photograph is likely a government work and not copyright-protected, and even if it’s owned by the photographer, the use is likely to be a fair use, given the free distribution of the unaltered work. But we have the First Amendment to think that, if this policy really represents the denomination’s religious doctrine, (1) it’s a pretty zany policy, and (2) it doesn’t speak well of the opportunities that the religious denomination allows to its female members (despite the newspaper’s protestations to the contrary).

Rationality or Rationalism? The Positive and Normative Flaws of Cost-Benefit Analysis
Court “Finds Through Its Own Research That There Is a Basis in the Quran” for Head Coverings