In the earlier post, I discussed whether the proposed San Francisco ban on circumcising boys would violate parental rights, even when the parents don’t raise a religious objection to the ban. (As I mentioned in the post, likely about 95% of male circumcisions in the U.S. are not done by Jews or Muslims, the two groups that generally circumcise for religious reasons.) But what about parents who do raise such a religious objection? Would they be entitled to an exemption from the ban, even if courts say the ban can be constitutionally applied — notwithstanding parents’ constitutional rights to direct the medical care of their children — in the absence of a religious objection?

The general Free Exercise Clause under the First Amendment: In Employment Division v. Smith (1990), the Supreme Court held that religious objectors are generally not entitled to an exemption from religion-neutral, generally applicable laws. This law would likely qualify as such a religion-neutral, generally applicable laws, because it applies to all circumcisions, whether religious or not. The proposal does specifically says that, in determining whether the exemption for immediate medical need applies, “no account shall be taken of the effect on the [child] of any belief on the part of [the child] or any other person that the operation is required as a matter of custom or ritual.” But that just reiterates that the ban is a flat ban on all non-medically-required circumcisions, with no exemptions based on religion, culture, personal preference, or anything else.

A law might still be found not to be religion-neutral if courts conclude that it was motivated by hostility to religion. But I doubt this will happen here. Courts require pretty strong evidence of such religious hostility to set aside a law that is religion-neutral on its face. And I suspect that courts will recognize that any opposition to particular conduct — whether it’s circumcision, sexual orientation discrimination, the use of marijuana, or what have you — will often spill over into criticisms of the religious groups that engage in such conduct (as well as towards people who engage in such conduct for nonreligious reasons). That’s natural, and requires no hostility to religion as such. So the fact that some backers of the initiative will doubtless have criticized religions that mandate circumcision wouldn’t suffice to invalidate the ordinance.

The “hybrid rights” exception: Smith, however, set forth an exception to its general rule. Two decades before Smith, Wisconsin v. Yoder (1972) held that the Amish were entitled to an exemption from a generally applicable law requiring children to attend schools (public or private) up to 16; and Smith did not overrule Yoder on this score. Rather, Smith dealt with Yoder like this (most citations omitted):

The only decisions in which we have held that the First Amendment bars application of a neutral, generally applicable law to religiously motivated action have involved not the Free Exercise Clause alone, but the Free Exercise Clause in conjunction with other constitutional protections, such as freedom of speech and of the press, or the right of parents, acknowledged in Pierce v. Society of Sisters, 268 U. S. 510 (1925), to direct the education of their children, see Wisconsin v. Yoder, 406 U. S. 205 (1972) (invalidating compulsory school-attendance laws as applied to Amish parents who refused on religious grounds to send their children to school). [Footnote: [Yoder] specifically adverted to the non-free-exercise principle involved … [by saying] that “the Court’s holding in Pierce stands as a charter of the rights of parents to direct the religious upbringing of their children. And, when the interests of parenthood are combined with a free exercise claim of the nature revealed by this record, more than merely a ‘reasonable relation to some purpose within the competency of the State’ is required to sustain the validity of the State’s requirement under the First Amendment.”] Some of our cases prohibiting compelled expression, decided exclusively upon free speech grounds, have also involved freedom of religion. And it is easy to envision a case in which a challenge on freedom of association grounds would likewise be reinforced by Free Exercise Clause concerns.

The present case does not present such a hybrid situation, but a free exercise claim unconnected with any communicative activity or parental right. Respondents urge us to hold, quite simply, that when otherwise prohibitable conduct is accompanied by religious convictions, not only the convictions but the conduct itself must be free from governmental regulation. We have never held that, and decline to do so now. There being no contention that Oregon’s drug law represents an attempt to regulate religious beliefs, the communication of religious beliefs, or the raising of one’s children in those beliefs, the rule to which we have adhered ever since Reynolds plainly controls.

This is a mysterious, mystifying, and perhaps mystical passage. I think the Smith decision is correct, but even I think that its explanation of Yoder is pretty poor. And lower courts have understandably split on what it means.

Some have dismissed the “hybrid situation” analysis as dictum, and sufficiently unhelpful dictum that those courts have felt free to reject it. Some have concluded that “hybrid situation” simply refers to a situation where the religious objectors have a winning claim on some other right, so that the religious objectors would win but not because of the Free Exercise Clause; under this approach, there would likewise be no right to religious exemptions from generally applicable laws even when another right is in play — only the other right would matter.

But some courts have held that the Free Exercise Clause does provide extra protection when the claimant can “make out a ‘colorable claim’ that a companion right has been violated — that is, a ‘fair probability’ or a ‘likelihood,’ but not a certitude, of success on the merits.” Some Ninth Circuit decision have so said (the quote I just gave is from one such case), but another Ninth Circuit decision has disagreed: “We reject Plaintiffs’ contention that Jacobs and Dresser raise ‘hybrid rights’ claims that should be subjected to strict scrutiny. The ‘hybrid rights’ doctrine has been widely criticized [citing sources], and, notably, no court has ever allowed a plaintiff to bootstrap a free exercise claim in this manner. We decline to be the first.” And the California Supreme Court has also rejected the theory that a Free Exercise Clause claim could be based on a combination of a religious objection (which wouldn’t normally itself justify constitutional relief) and another constitutional claim that is merely “colorable” (rather than a winner on its own).

So if courts conclude that a “hybrid situation” under Smith is merely a situation where the religious claimant also has some other winning constitutional claim, then the Free Exercise Clause wouldn’t add anything to the analysis (see the general Free Exercise Clause discussion above): The religious parents’ objection would stand or fall on their parental rights claim.

But if courts accept the “colorable claim” theory, then they would have to decide whether the parents’ pure parental rights claim is “colorable” (whatever that might mean here); and, if it is, then the standard of scrutiny would be elevated from that normally used for parental rights (which, as I mentioned, is uncertain), to the “strict scrutiny” used in cases such as Yoder — a religious exemption would have to be granted unless denying it would be “narrowly tailored” to a “compelling government interest.” In principle, this might mean that parents who are religiously motivated to circumcise their children might win, even if the parents who are nonreligious motivated would lose.

What “strict scrutiny” might mean in practice: Yet in practice, even the “colorable claim” view of the “hybrid situation” language might not much matter. “Strict scrutiny,” though very demanding in many contexts, it has never been that demanding in the religious exemption context. While the “strict scrutiny” test in race and free speech cases was generally seen as “strict in theory, fatal in fact” (Gerry Gunther’s phrase), almost always invalidating the government law, in religious freedom cases it was “strict in theory, feeble in fact” (Larry Sager & Chris Eisgruber’s phrase).

And that was likely inevitable, for reasons I discussed in my A Common-Law Model for Religious Exemptions article. Even if religious objectors have a constitutional right to exemption from some generally applicable laws, they can’t have the nearly certain victories that truly “strict” scrutiny promises. We can have a regime where nearly all race classifications are unconstitutional, and nearly all content-based speech restrictions (imposed by the government as sovereign, not as proprietor, and exclusive of the traditionally recognized Free Speech Clause exceptions) are unconstitutional. We can’t have a regime where religious objectors can violate nearly every generally applicable law — including laws that protect the rights of others who don’t share the objectors’ religious views — simply because they feel a religious motivation to do so.

So in practice, I expect that even if the Free Exercise Clause is seen as presumptively requiring exemptions from laws that interfere with parents’ right to medical care, that presumption would be no stronger for religious objectors than it is for other parents. So the analysis would end up being much the same as that discussed in the parental rights post.

The California Constitution: The California Constitution has its own religious freedom guarantee, and some states have interpreted their state guarantees as providing more protection for religious objectors than does the federal Free Exercise Clause. As the 2010 map below shows, eleven states interpreted such provisions to require “strict scrutiny” in religious exemption, and a 2011 Kansas decision makes that number twelve. One state, New York, has interpreted such a provision to require a weak form of “intermediate scrutiny.” Five states have disagreed, interpreting such provisions as protecting only against deliberate discrimination (thus following Smith). And the rest haven’t decided this. (Some legislatures have enacted specific statutory religious exemption schemes — or, in Alabama, a specific constitutional amendment expressly mandating a “strict scrutiny” approach — but the effort to enact such a law in California was ultimately blocked.) 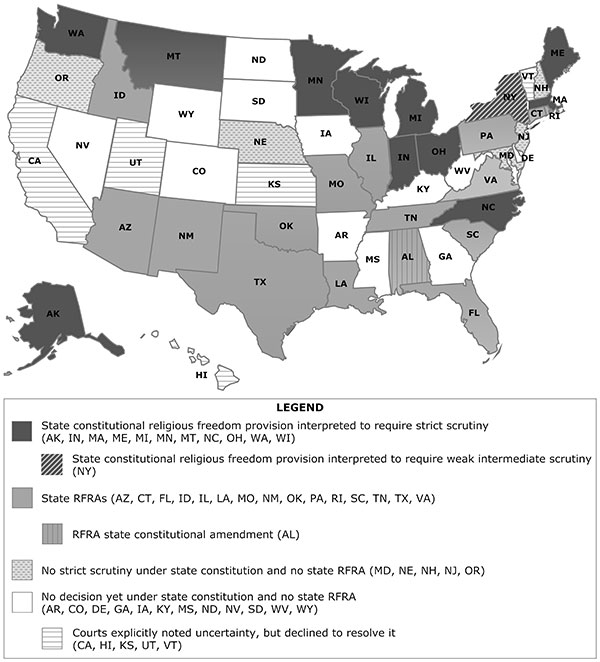 The California Supreme Court, in particular, has not resolved this question. If California courts do conclude that the California Constitution secures a presumptive right to a religious exemption, then religious parents wouldn’t have to rely on their parental rights claim. In particular, recall that the claim of parental rights to control a child’s medical care might be unavailable — the matter is unclear — to parents who don’t have a medical motivation for circumcising their child. But if the parents have a constitutional religious exemption claim, then they’ll be assert it even if their motivation is purely religious, and not medical.

Nonetheless, for reasons given in the “what strict scrutiny might mean in practice” discussion above, parents might lose a “strict scrutiny” analysis of the religious exemption claim. Just as a court might reject a medically motivated parent’s parental rights claim, on the grounds that the government interest overrides the parental right, so it might reject a religiously motivated parents’ religious exemption claim.

The bottom line: So with the religious exemption claim, as with the parental rights claim, the result remains uncertain.

1. If the courts reject the “colorable claim” view of the Smith “hybrid situation” language, parents will lose on their religious exemption claim, though they might have a parental rights claim (alongside parents who have no religious objections).

3. If the courts interpret the California Constitution as departing from the federal Free Exercise Clause standard, and requiring “strict scrutiny” in religious exemption cases, then the parents’ religious exemption claim will probably be treated much like the parental rights claims brought by parents who have medical motivations for having their sons circumcised.

Again, I wish I could say something more definite, but the precedents don’t warrant any such certainty.

In the comments to this post, please do not discuss the pure parental rights questions; there’s a separate post for discussing those. I thought it would be helpful to have here a separate discussion that focuses on the religious freedom issue.