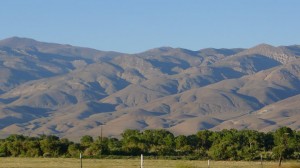 With so much snow this year in the Sierras, it has been hard to get very far in on trails which we normally take.  So we’ve spent most of our hiking time in the White Mountains, which form the other wall of the Owens Valley, up around the Bristle Cone Pine forest – quite spectacular mountains, and deceptively high.  They look like gently folded hills from some vantage points, and then you realize the “hill” is White Mountain, and it is over 14,000 feet, only two hundred feet lower than Whitney, and the third (4th?) highest peak in California.  I’ve become quite entranced with the White Mountains, which are having a late wildflower bloom on account of the cool spring, and with the Great Basin.

I’ll be back to DC momentarily, but here’s wishing everyone a lovely July 4th. Meanwhile, for those of you Easterners who might lose your way in The Empty Quarter, here is the official highway sign at the beginning of Highway 6 as it leaves Bishop for the Nevada desert. 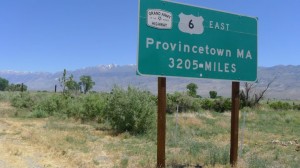 And Speaking of the Inalienable Right to the Pursuit of Happiness . . .
In Defense of the Debt Limit’s Constitutionality