The case is today’s Neighborhood Enterprises, Inc. v. City of St. Louis, litigated by the Institute for Justice. IJ’s client wanted to put up this sign: 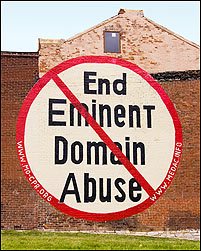 The city said no, because the sign was banned under its Comprehensive Sign Control Regulations — but if the sign had been a flag, symbol, or crest of a nation, state, city, or fraternal, religious and civic organization,” or for that matter a “work[] of art which in no way identif[ies] a product,” then it would have been exempted from the ordinance. (For a discussion of the problems of the “work[] of art” exception, see this post.)

The district court concluded that the ordinance was “content-neutral,” despite the content-based exceptions; but the Eighth Circuit just reversed, concluding that the ordinance indeed restricted speech based on its content: “[T]he zoning code’s definition of ‘sign’ is impermissibly content-based because ‘the message conveyed determines whether the
speech is subject to the restriction.'” (The ordinance may be viewpoint-neutral, but that’s not enough for constitutionality; even viewpoint-neutral but content-based ordinances are generally subject to “strict scrutiny,” and generally fail such scrutiny.) Sounds right to me.