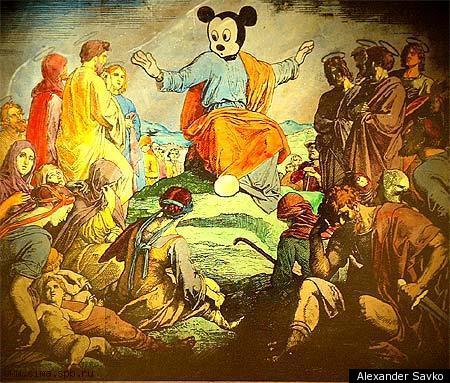 A court in central Russia has ruled that a painting of the Sermon on the Mount that features Mickey Mouse instead of Jesus Christ [reproduced above -EV] is extremist, … [which means] the painting will be banned from exhibitions, newspapers, magazines or television….

“During the court hearing, it was established that [artist Alexander] Savko’s technique of uniting the image of Jesus Christ, which is sacred for Christians, and the comical image of Mickey Mouse, which in this situation is vulgar, has turned the graphic work into a caricature of Jesus Christ,” a statement on the prosecutor’s office’s website says. “The Gospel story is therefore presented by the artist in the form of a comic, which is an extremely cynical and mocking insult to the religious beliefs and feelings of Orthodox Christian believers[.”] …

A probe into the legality of the painting was launched in 2007 after a Christian organization accused the [2007] Forbidden Art [exhibition] curators of defacing religious symbols. The Moscow City Court in 2010 ruled the exhibition’s organizers were guilty of inciting national and religious hatred and fined them.

If anyone can point me to the Russian-language statement by the prosecutor, or to other Russian-language stories that are especially enlightening on this, I’d love to see them. Thanks to Prof. Howard Friedman (Religion Clause) for the pointer.

Adult Children Sue Mother, for Allegedly Having Been Really Mean
A Question for Federal Prosecutors About the Emotionally Distressing Tweets/Blog Posts Case