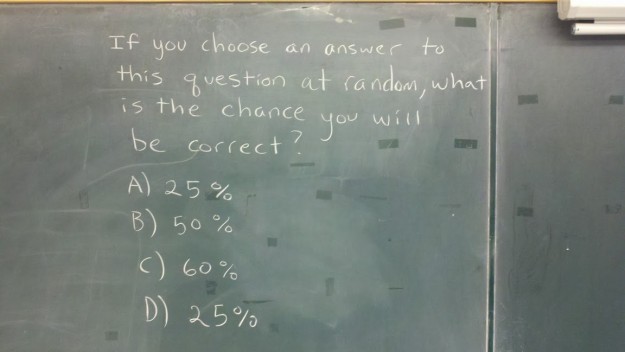 I am sure that many readers have seen this floating around the internet.  I am not great at math; I’m not intuitive at it and hate trick questions most of all, because they are … tricky.  On the other hand, ever since realizing when I started law school that in my life I couldn’t avoid – what, exactly? – well, the basic math required to do the first year of a standard MBA, I have forced myself to grapple with math with my limited math intuition.  I work problems, learn the formulas, do online courses that force me to do problem sets to keep basic skills in things like statistics.

I’m saying all this as a suggestion to people like me who, unlike apparently the vast majority of VC commenters, are not particularly good at math but need it at some level.  The problem for folks like me, who need it, even like it, but are not great at it, is that there’s always a higher level.  The key for most people, for people like me, as with most technical subjects that are not directly your day job but still important, is to figure out where to perch yourself.  There’s no point in my trying to turn myself into a scientist, engineer, economist, or CS person.  What this means is that I do best when it’s fairly routine, and I’m working within a particular topic – what I hate and what I’m sure most people like me hate, are tricky word problems that might draw on something completely outside how I understand the problem.  The sort of intuitive leap that I am really good at in some things, but not in this.

Put another way, if it’s the sort of problem that The Chief Conspirator loves, it’s probably my worst nightmare.  That said, I assumed that this was one of those fiendishly counterintuitive problems that sometimes confuse even sophisticated technical folks.  But even after consulting one of my pop sci books on games with statistics, it didn’t seem to fit.  I won’t embarrass myself by trying to explain how I thought about it; I did start by asking, suppose there were only one choice, what?  Suppose there are two choices, what?  But this approach didn’t seem to quite answer the question.  I’m now not sure if the question is ambiguous in some way, or whether I’m simply missing, as ever, the intuitive leap.  It’s bugging me, though, and I Won’t Rest Until You All Have Answered It.

(And while I’m thinking of it, I should note that I have been experimenting with my comments policy on my posts.  I’ve been swinging round to the view that I don’t have time to edit comments, or even read them most of the time.  So I am generally going for a no comments policy, unless I have a specific question or series of questions to which I want to direct commenters.  As in one of my earlier posts on Greek CDS exposures, focusing the questions to commenters and deleting responses that were off topic seemed to help focus the comments.  It seemed both to draw in expert substantive comments and to avoid the problem of path dependency leading to the entropic phenomenon of Comment Thread Decay – a special Hari Selden-like natural law of social networks with anonymous commenters.  So this is opened to comments, and … please explain your answers.)

(Update: Thanks for the explanations; I understand the recursion now.  Further question:  does this kind of recursion problem show up in actual computer science situations? In however complicated or specialized form?   Of course, my reason for posting this was also to indirectly think about ways in which people have to “pick their level” in technical subjects.  That means, in many situations, having enough background to spot the problem as a problem and then have an inkling of how one might solve it – but then having to ask other people to actually have confidence in an answer.  I’m interested, in other words, in how to think about managerial decision-making on the part of non-specialists and specialists, including when to ask for help.  In this case, what the specialists tell me, among other things, is that it is dangerous to assume in this case that there is a correct answer as though it were an SAT or brain-teaser with a defined answer.  I sort of thought this – understood that I seemed to be looping – but then didn’t have the knowledge to have confidence that this was, in fact, the core of the problem.)

Why Is the Law So Either/Or?
Colbert on OWS