I’ve often blogged about the scope of the Computer Fraud and Abuse Act, 18 U.S.C. 1030, the federal “unauthorized access” statute. This graph of the number of annual judicial citations to the statute from 2002 to 2011, from Westlaw’s ALLFEDS database, helps explain why I think it’s an important issue: 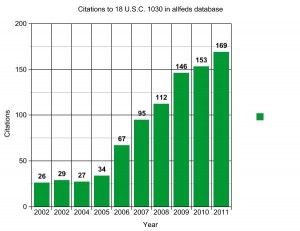 Click on the graph to see the data more easily. Not all these citations are from opinions applying the law in a substantive way, of course, but my guess is that the proportion of citations that are from such opinions has been relatively constant.

UPDATE: While I’m at it, here’s a chart during the same time period of how often the phrase “Fourth Amendment” appeared in the same sentence as “computer.” 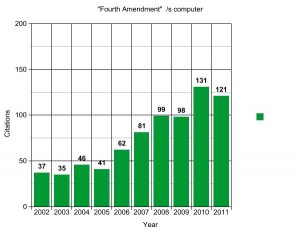 Note that some of these trends likely reflect Westlaw having access to a greater proportion of opinions over time. If the allfeds and allcases databases are expanding in size generally, some of the trends in the cases from the charts above will reflect the larger databases rather than an increase in the rate at which these specific words are appearing. I tried a few terms like “Fourth Amendment,” “Equal Protection,” and “First Amendment” as controls, and found that they each were mentioned individually about twice as often in 2011 than in 2002 in both the allfeds and allcases databases. So part of the effect above is likely that the data base of cases in 2011 is about twice as large as it was in 2002.

Sackett Oral Argument
Would This Be Illegal in New Orleans?