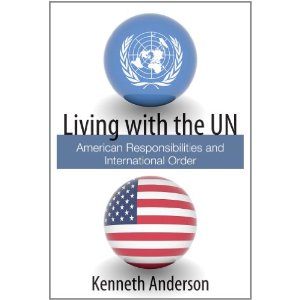 My book, Living With the UN: American Responsibilities and International Order, is now in stock and on-sale at the Hoover Institution Press website.  I have a copy in hand and I’m delighted to be holding it.  It’s not quite like holding your new baby – but for an inanimate object, it’s closer than you might have thought.

It will be a couple of weeks – April 17, I understand – before it is available through Amazon, Barnes & Noble, and other online sellers.  A Kindle edition will be released on April 17 as well.  My thanks to the Hoover folks, my editors, and others for their patience in this long running project.  Over the next couple of months, I will be talking about various themes in the book – UN-US relations, the nature of the UN, the different ways in which the US should engage (or not) with different parts and functions of the UN.  To start with, however, I wanted to go to a very different topic – this one about publishing, choosing a publisher, and why I chose the Hoover Institution Press.

This is a policy essay, not a “scholarly” book – it has about twenty footnotes for the whole thing, and a bibliography of secondary sources aimed to be accessible to those without a university research library or knowledge of how the UN online archives work.  My interest in this case is dissemination of the ideas in the book, not staking out academic turf.  So my general choices were three: One, find a commercial trade publisher, which seemed improbable given the subject matter, the way it is written, and my lack of trade press publishing in the past.  Two, find a university or academic press; this seemed like the obvious thing, and in fact there were several options that direction, notwithstanding that this is something like the opposite of the dense academic monograph.  Third, go with a think tank policy press in which case, given the history of the project and my affiliations, it would be Hoover.

The Hoover publishing folks have been marvelous – let me strongly recommend them if your publishing suits their programs.  They have been fabulous on production values, editing and copy editing, all the professional production elements.  They have been patient to a fault in waiting for the manuscript and letting me make later changes.  And they have excellent marketing staff and have a commitment to getting the book out there in a way that is only sometimes true of academic presses whose primary audiences are academics and university libraries.  But it is true that several academic presses are great in all these ways, too, so one has to ask, why consider a think tank press?  After all, isn’t a think tank press – even one associated with a university, like Hoover – taking a hit in academic prestige and respectability?

(Added: What I mean by ‘academic prestige’ here is that a press like, say, Cambridge UP conveys a signal to other academics that the book has been vetted for scholarship, etc.; and so, if I were seeking tenure or something similar, Cambridge would send an important signal.  Think tank presses, even when associated with a university such as Hoover and Stanford, send a signal of a political program associated with policy advocacy.  Since this is precisely what my book does and proposes to do, I’m fine with this and, anyway, I’ve got tenure.  Not everyone is in that signaling position.  If one reads through numbers of the Hoover Press books, you’ll see that they have a very high level of scholarship and intellectual quality – mine is an exception for being far more an essay – on things running from the Taylor Rule to Congressional intelligence oversight – but are written much more succinctly and clearly, and never consist of a dissertation-turned-monograph destined never to be checked out of the university library.  All of which is a plus for me, but then … I’ve got tenure.)

I thought carefully about these issues before choosing to go with Hoover.  In part this is a matter of how one sees academic prestige in public international law and, particularly, international organizations – which are, after all, human institutions and not purely legal propositions.  The human experience of them matters – at least if you want to say the things about them that I say in this book.  I had a long career in the human rights and international NGO world before coming to teach in my mid-forties, dealing with international organizations frequently, and whether in private or public law, I have a relentlessly practical streak that, at least in inherently political fields such as public international law, can’t see formal legal categories as dispositive.  International law for me is always fused with pragmatism (to draw from Michael Glennon’s fine book on this topic), politics and diplomacy, realism – policy, in other words.  But formal academic “brilliance,” to put the question of academic prestige in that way, likewise requires a more formal (and closed) system that allows one to show in some surprising and (one hopes) useful way that x is true and not y.  Policy, on the other hand, is about criteria of plausibility, not truth formally as such or purely for its own sake or, frankly, sheer marvelousness in reasoning.  One can do that in many areas of domestic law, because the legal framework drives the outcomes as such, but not in my field.

So prestige is not precisely my aim because I don’t think the subject matter or the writing work to that end.  This is not to say that it has not been researched with the same care that the purely scholarly work would have – on the contrary, it is over-researched for such a short book, and it is also infused with a large number of interviews and discussions of a more journalistic nature than would drive a purely academic book.  I will say that it wears its substantive learning deliberately very lightly.  I spent a lot of time a few years ago understanding the UN budgeting, accounting, and fiscal control systems – such as they are – from the inside out, and I am pretty certain I am the only public international law academic ever to have done so, at least among the Americans.  But if prestige in the sense of building my own academic capital is not the issue here, then what do I want?

Dissemination, mostly.  I want to get this book out into the hands of a couple of audiences: the Washington and international organization policy audiences; the international NGO world; academics in international law, organizations, politics, and international relations; both the Obama administration (despite this book’s many criticisms) and the Republican campaign; and finally classrooms at the undergraduate, public policy and graduate school, and law school levels. The key issue there is price.  The book retails directly from the Hoover site for $19.95.  Hoover could sell it for more, but it is in the business of dissemination of ideas too – it and I are aligned. By contrast, the decisive factor for me in deciding what press was price – the other publishers wanted to sell at minimum $35, in several cases $40.  I’m not sure anyone would want to adopt this as a text in a class on international organizations – not as the main text, but as the short, fairly readable critique and counter-view – but I can’t imagine anyone wanting to adopt it at $40 as a supplemental text.

It is true that everyone will discount, starting with Amazon and Barnes & Noble.  But I think that just gets it down to $20 – down to where Hoover starts its pricing.  Whereas I suspect that Amazon will discount the book very quickly to below $15, and I saw on a B&N page that it would sell at $13.50 – straight out of the box.  Now, if I made my living selling books or if Hoover made its living publishing them for a profit, this would be a big problem.  But we are both in the ideas-dissemination business.  We can live with this.  I think people can be persuaded to take a look at this book with a $13 price point (in hard cover, let alone Kindle), whereas at over $20 that is not nearly so likely.  Moreover – and this is very cool – at some point down the road, in a year or two, as sales dry up, Hoover will make the book available free as a pdf off its website.  So if your priority is dissemination of ideas and the book, rather than academic signaling and red queen behavior, this is not a difficult call.

Let me invite your ideas on how I should market this book.  If my aim is dissemination of ideas, getting the book and its ideas out there, both into policy-maker and influencer hands as well as a broader university and interested-public audience, what should I do?  For this kind of book, we are in somewhat uncharted territory.  I’m not self-publishing a Kindle romance novel and this book is not coming from Penguin Press from an established writer with a track record and some built-in audience.  I want to take advantage of social media and the new word of mouth it implies … tell me what my marketing strategy should be.

Lethal Self-Defense, the Quantum of Proof, the “Duty to Retreat,” and the Aggressor Exception
Can the Police Arrest Someone for Homicide, When It’s Clear He Killed But Likely in Self-Defense?