As readers know, my concern about regulation of consumer credit and retail banking is that inefficient efforts to “protect” consumers by regulating prices and terms of credit can have severe unintended consequences by reducing access to higher-quality options (such as credit cards and debit cards) and push consumers to use less-preferred options involuntarily (such as payday lenders and check cashers).  (And let me stress that I think there is room for those alternative lenders in the consumer credit market, I just oppose regulations that basically force consumers to use those products).

Along these lines Reuters has now constructed the “Cordray Index,” which shows how the onslaught of federal regulation as well as the continued struggles of the retail banking system to work off bad debt has created a boom time for alternative lenders as consumers have been pushed into these products.  Of course, the response of regulators to increased consumer use has been predictable, albeit tragic–to try to take these options away from people (which will, of course, simply push them further down the chain of products).  The logic turns conventional economics on its head–so when we see increased demand for this product we are supposed to think that consumers are worse for using it instead of available alternatives?  I don’t get why the ordinary rules of economics don’t apply in this market–it seems to me that increased demand for a product is generally evidence of consumer satisfaction relative to other available choices.

Anyway, here’s the “Cordray Index” from Reuters (this is similar to a chart that I posted from the WSJ a few months back that makes the same point): 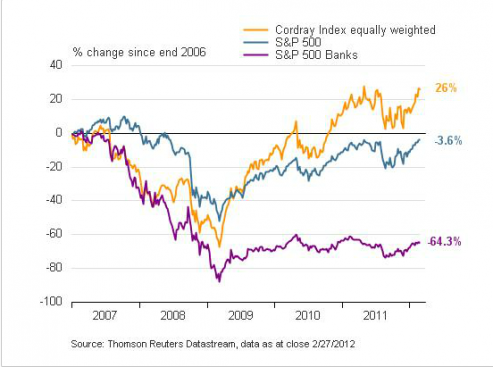