The 71-year-old celebrity said that among the works criticized are the 1994 production “al-Irhabi” (The Terrorist), in which he portrays an Islamic fundamentalist and the play “al-Zaeem” (The Leader), a comedy in which Imam pokes fun at the region’s autocratic leaders.

Another prominent Egyptian, Christian businessman and politician Naguib Sawiris, “is facing similar charges of defaming Islam after he posted pictures of Mickey and Minnie Mouse dressed in Muslim attire on Twitter” — the picture appears to be this one: 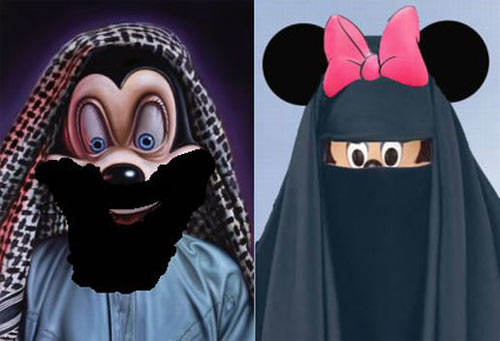 Thanks to Opher Banarie for the pointer.