A few weeks ago, I stayed with my family at a Marriott hotel in Hershey, PA that had a small indoor pool. Until then, I was only vaguely aware of the controversy over federal ADA regulations that seem to require all public pools to have permanent lifts for the disabled. And to the extent I was aware of the controversy, I understood that it was primarily about the significant costs the lifts would impose on small hotels (which might be eligible for a waiver, at the government’s discretion).

I was at the hotel for approximately two hours. In that time, three kids besides my own used the pool. Of those three, one ran smack into the lift, fortunately managing not to seriously injure herself. (The pool area at this hotel is rather small, and there wasn’t much space between the wall of the room containing the pool and the pool, and at one junction the lift took up much of that space.) A second used the lift as a diving board, fortunately only for jumping, not diving. But this is a serious hazard, as a child (or adult) could easily use the lift for diving, and into shallow water.

It took me less than the two hours to figure out that these permanent lifts are a significant hazard to children (and others). I Googled it when I arrived home, and discovered that the hospitality industry has in fact raised this argument to regulators. It is far from frivolous. 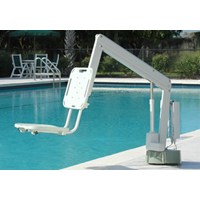 The government has extended the deadline for compliance until January 2013. I hope by then the feds will have decided to junk the regulation, and allow ADA compliance via portable lifts that are stored until a disabled person seeks to used the pool.