An extremely disturbing new study published in the American Journal of Public Health finds that suicides have replaced car accidents as the leading cause of injury-related death in the U.S. This is partly because deaths from automobile accidents are down — that’s the good news.

But the truly catastrophic news is that the suicide rate has increased dramatically: between 2000 and 2009, according to data from the U.S. National Center for Health Statistics, deaths by suicide went up by 15%, and deaths from poisoning increased by a whopping 128%. Moreover, researchers say that many of the poisoning deaths, which are labeled as “accidental,” may actually be intentional. According to the study’s author, Professor Ian Rockett, an epidemiologist at West Virginia University, “Suicides are terribly undercounted; I think the problem is much worse than official data would lead us to believe.” He added “there may be 20 percent or more unrecognized suicides.”

Experts note that much of the increase in poisoning deaths is due to prescription drug overdoses, but none of the reports I found about the study speculate about what psychological, social, or economic causes are behind the spike in suicides. (I was unable to find an online copy of the study itself). But there is strong evidence elsewhere that our disastrous economy may be playing a significant role. Last year, a report by the Center for Disease Control and Prevention found that “[s]uicide rates in the U.S. tend to rise during recessions and fall amid economic booms.” …

Here’s the problem: While there does seem to be a correlation between the suicide rate and the unemployment rate,

Here’s the graph giving the 1981 to 2010 data, with the fairly smooth blue line indicating suicide, and the much more sharply varying red line indicating unemployment rate. (I looked at the same CDC WISQARS dataset as that used by the study for 1999 to 2010, though without the regressions done by the study; the 1981 to 1998 CDC WISQARS dataset, which seems comparable, and which is also age adjusted to the 2000 demographics; and this Department of Labor dataset for unemployment data. To see the numerical data, see this Excel spreadsheet.) 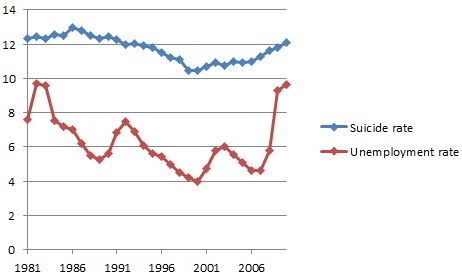 Again, you can see some substantial correlation between suicide and unemployment generally, but you also see some rather sharp divergences, plus (1) the suicide numbers of the last few years being below the 1980s totals, including from the low-unemployment late 1980s, (2) the 2000 to 2009 increase reflecting a trend that began in the low-unemployment years and then at most somewhat accelerated in the high-unemployment years, and (3) 2000 being the base year that most shows an increase in suicide, since it and 1999 were unusually low-suicide years. Or at least that’s what the data suggests to me; please let me know if I’m missing something big here.