By Eugene Volokh on October 8, 2012 1:56 pm in Freedom of Speech Restricted by Thugs

The advertisement, which the New York Metropolitan Transportation Authority was also ordered to run a few months ago, is this one: 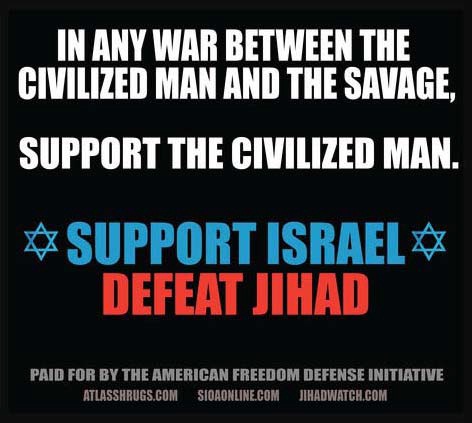 The D.C. agency originally accepted the ad, scheduled to run Sept. 24, but then “deferr[ed]” it indefinitely on Sept. 18 “due to the situations happening around the world at this time” (apparently referring to the riots and murders overseas that were apparently partly contributed to by the YouTube release of the “Innocence of Muslims” video). Last Friday, a federal district court concluded that this likely violated the First Amendment, and ordered that the ad run starting 5 pm Eastern today. No word on whether the MTA would have likewise banned an ad quoting Hillary Clinton’s condemnation of the Libyan consulate attackers — who likely saw themselves as indeed waging “jihad,” though against America rather than Israel — as a “small and savage group,” or the Palestine Solidarity Campaign’s claim that “The ‘Freedom Flotilla’ bearing supplies in May 2010 was savagely attacked by the Israeli navy.”

UPDATE: A quick thought on the underlying constitutional question, largely based on my earlier post and also this one: I sympathize with the arguments that the government, acting as service provider, should be able to exclude material that is likely to greatly alienate or offend some of its customers, while still making money from material that won’t have that effect. But the Court has generally rejected this argument, at least when it comes to the government’s discriminating within the category of ideological expression. The Court has concluded that viewpoint-based restrictions, even on government property that isn’t a “traditional public forum,” are unconstitutional. And this makes some sense, given just how much money and property the government owns (especially once one goes beyond just access to physical property, and gets to access to broadly available government benefit programs, such as charitable tax exemptions).

Now perhaps one can argue that, though the government generally may not suppress speech (or even impose mild extra costs on the speech) because of the threat of violent retaliation by those who disapprove of the speaker’s viewpoint, see Forsyth County v. Nationalist Movement (1992), that shouldn’t apply to government property such as buses. Restrictions based on the threat of violent reaction to the speaker’s viewpoint, the argument would go, are content-based but viewpoint-neutral from the perspective of the government, so they can’t usually be imposed (see Forsyth) but they can be in “designated public fora,” such as buses. But a recent federal appeals court decision suggests the contrary, and I think rightly so.

What Does Lochner Have to Do with “Here Comes Honey Boo Boo”?
Huawei, ZTE Hit By House Intelligence Committee