First, many thanks to Eugene and the rest of the VC team for inviting us to guest-blog this week.

The Knockoff Economy is about copying, and specifically about how copying, copyright, and creativity mix in a set of somewhat unusual industries—from fashion to food to football. Though our main focus is copyright, we also talk a bit about patent and other forms of intellectual property (IP).

As most VC readers know well, the American system of IP is not aimed at fairness or generally grounded in moral rights. It is a government intervention into the market aimed at precluding some forms of competition—those based on copying other innovations. Competition via copying is barred (or severely limited) as a way of ensuring that originators have a strong incentive to innovate in the first place.

We should say up front that we generally agree with this approach. We think that IP laws are necessary. The interesting and important question is how much IP protection is necessary to spur creativity and innovation.

In some cases, we argue, the answer is very little. And that has big implications for our IP policy, which has tended, over the last 200 years, to get ever-stricter and broader. 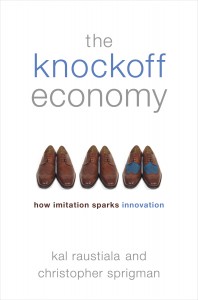 Now, savvy readers will recognize that law professors (especially liberals like us) criticizing IP law is right up there with dog-bites-man as a news story. What we do in the Knockoff Economy that is different is that we approach this issue in, what we believe, is a novel way.

Rather than look at how, say, copyright works (or doesn’t) in the publishing or film industries, we look at creative industries where there is no copyright protection, or where that protection is, for practical reasons, not used. And what we find is that in many of these industries, creativity survives or even thrives — despite extensive copying

A good example, and one that we first wrote about several years ago in an article called The Piracy Paradox, is the fashion industry.  Copying in fashion is an everyday thing, and many firms, such as Forever 21, make their living off it.  This has been true since the early 20th century—and it was bemoaned then as  it is now. During the Depression, a guild was created to police copying among American designers and retailers, and for a while it worked well–at least for cartel members.  Consumers, of course, paid higher prices.

But ultimately the Supreme Court declared that the guild was an antitrust violation, and in the decades since—despite many predictions of the fashion industry’s impending economic collapse—the American fashion industry has grown and thrived. (Small point: we don’t mean manufacturing, even though a substantial amount still occurs here, esp. in places like LA. We mean designing.) As we explain in the book, a big reason the industry has been successful is the freedom to copy. Copying, far from killing creativity or driving out investment, has spurred greater creativity.  There are two main reasons we will briefly sketch in this post.

First, fashion is an intensely status-based enterprise, and so the freedom to copy—which allows designs to filter into the broader marketplace more swiftly—also means that designs become popular more swiftly. That in turn induces those who value standing out to seek a new design. Copying helps trends get started more quickly. And it kills them more quickly as well, as the fashion-forward move away from designs that have become overexposed. And as they do, designers have to be ready with new designs. In short, copying acts as a turbo-charger on the fashion cycle.

Second, fashion is all about trends, and trends are all about copying. This is implicit in what we just wrote. But copy-driven trendmaking has another feature. Trends are what help the trend-seeking to know what to wear to remain in style. Trends, in other words, help organize and anchor the fashion industry’s output into identifiable categories. This anchoring spurs sales, since for many consumers they don’t want to stand out, but instead to fit in.  Copying helps lowers consumers’ information costs regarding what’s in style at any given moment.

As a result of these phenomena, the freedom to copy that exists in fashion is not a drag on innovation—it is spur for it. That has implications for the occasional efforts in Congress to extend some form of copyright to fashion. But it also has larger implications, in particular for the notion that IP is a necessary element in spurring creative work.

And as we explain in the book, this pattern of copying coexisting with creativity is not unique to fashion. In the coming days we’ll post about some of the other industries we explore, and also discuss some of the broader questions that emerge from our study.