Yesterday we introduced some of the big themes of The Knockoff Economy, and briefly explained why the fashion industry remains so creative despite having its central product—clothing designs—freely copied by any firm that thinks it can turn it a profit by aping an original design.  In the book we look at several other examples of creative fields in which copying is common. One of the most interesting and fun is the culinary world.

In this post, we thought we’d present a brief excerpt from the chapter on food to give a flavor (so to speak) of the book.  In this excerpt, we discuss the incredibly creative culinary scene that now exists, and how copyright applies (or doesn’t) to cuisine:

“The apotheosis of this trend toward extreme culinary innovation is what is often termed the “modernist cuisine” movement. Practitioners, such as Ferran Adria of the recently closed El Bulli restaurant in Spain and Homaro Cantu of Moto in Chicago, use complex and highly inventive processes to create flavored foams, liquid “olives,” edible inks, and various other savory special effects. Many of these dishes push the envelope of good taste; a few are bizarre and arguably inedible. But they are unequivocally novel, and people pay dearly to experience them.

Even outside this rarified world, however, creativity in cuisine is prized in a way that contrasts sharply with the past. Chefs frequently seek to charge jaded palates through novel combinations of flavors, produce, and technique. The Wall Street Journal, for example, noted in 2006 “a big shift in high-end restaurant culture. . . . The past decade has seen the focus shift to innovation” and away from the apprentice-driven reproduction of classic dishes that anchored cuisine (especially French cuisine) for many decades…

This tremendous output of creativity in contemporary kitchens has been accompanied by substantial copying, or more charitably, borrowing, among chefs. Now-ubiquitous dishes, such as molten chocolate cake or miso-glazed black cod, did not just pop up like mushrooms after a storm. Each debuted in a specific restaurant but soon migrated outward in slightly altered form. The putative inventors (Jean-Georges Vongerichten in the case of molten chocolate cake, Nobu Matsuhisa for miso black cod) can claim no royalties on their creations. Nor can they effectively halt the interpretation of their creations by others. Indeed, today a molten chocolate cake is even on the menu at a mass-market chain such as Chili’s. (In fact, a recipe claiming to be for Chili’s Molten Chocolate Cake is readily available on the Internet). 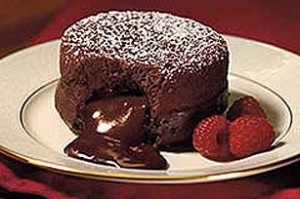 Why are dishes like molten chocolate cake not protected against copying? In the United States, copyright law protects only “original works of authorship fixed in any tangible medium of expression.” In principle, there is no obvious reason why a culinary creation is not a work of authorship. It has an author (the chef), and it is certainly fixed in a tangible, albeit edible, medium of expression—the recipe is “fixed” in the food itself.A painting of a molten chocolate cake would clearly receive copyright protection; so too would a sculpture of one. But as we will explain, under current law the molten cake itself would not be protected.

At the outset it is important to distinguish between the recipe for a given dish and what we referred to as the “built food.” The recipe is the ingredients and instructions: what a reader might clip out of the newspaper or pull up on Cooks.com. The built food is the actual, edible version that appears on a plate. This distinction is in many respects no different from that of the sheet music for a song versus the sound recording of that same song, or the architectural plans of a building versus the actual building that you can enter and live in.

As it happens, both sheet music and performed songs are protected by copyright. The same is true for architectural drawings and actual buildings. (In the case of buildings, this was the result of a specific amendment of American copyright law, the Architectural Works Copyright Protection Act, enacted in 1990). But despite the similarities to music and architecture, neither recipes nor built food are currently protected by copyright. And there has been no serious push to promulgate a “Culinary Works Copyright Protection Act” equivalent to the Architectural Works act.”

As we explain later in the chapter, the doctrinal distinction between sheet music and recipes is not especially compelling. Both are instructions on how to render a work. But regardless, that is the state of the law today. And we find that despite this legal lacuna, there is little reason to believe that copying is a major drag on creativity in food.

In fact, the opposite is more likely to be true. Many great chefs, including Ferran Adria himself, have argued that an open, shared model of innovation is what works best in the culinary world. These chefs—though not all—are very skeptical that copyright protection for recipes or built food would promote more innovation—quite the opposite. We also look at the role of social norms in constraining the depth of copying, drawing on the work of some economists who have studied Michelin-starred chefs in Paris.

The bottom line is that in cuisine copying coexists comfortably with creativity. Now, as readers will surely notice, cuisine and fashion do not lend themselves fully to digitization, and so copying a dish is different than copying an Mp3 file. Of course, copying a recipe digitally is very similar to an Mp3, and in this comparison lies a few of the major points of the book. Let us just mention two.

One, creative fields differ in many respects, ranging from cost of production to susceptibility to digital copying. Our IP system, by contrast, does not draw many distinctions, and to the degree it does, it distinguishes crudely. Two, copying can be blunted when a good is analog rather than digital. Recipes and songs can be digitized and copied very easily using current technology. But built food and its musical analogue, live performance, cannot. So one significant lesson from the world of cuisine (and high end bars, which we also discuss) is that creative industries can prosper even in the face of widespread copying by shifting revenue models toward hard to replicate goods, like restaurants (hard to copy) versus recipes (easier) in cuisine, or live rock shows (hard to copy) versus recordings (easy) in music. In these instances we’ve just provided, restaurants and rock concerts are both a sort of live performance, in which consumers look for and hopefully get an experience which is hard to copy. In the case of recipes and music recordings, these are more easily replicable products – especially recordings, which can be copied perfectly.

We’ll end with one last interesting tidbit. Cookbooks, full of recipes that can be readily found (copied) on the internet, would seem to be a great candidate for a music industry-style economic implosion. But in fact, the cookbook industry is booming. Can you guess why?

The Legality of Counterhacking: Baker Replies to Kerr
Morriss on Tamanaha