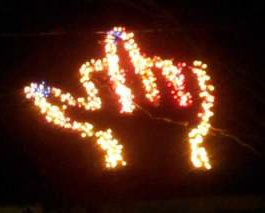 A Louisiana trial court has just “granted Sarah Childs’ request for a temporary restraining order prohibiting the City of Denham Springs from interfering with her display of lights on the roof of her house” — specifically, the display shown above. From the Complaint filed in support of the order:

On or about Tuesday, November 27, 2012, as part of an ongoing disagreement with her neighbors, Plaintiff Sarah Childs installed on the roof of her house a string of holiday lights in the shape of a human hand with an extended middle finger.

I’m inclined to say that this is right — though giving someone the finger in person could sometimes be seen as constitutionally unprotected “fighting words,” because it is a face-to-face personal insult that creates a substantial risk of a fight, I suspect that it’s pretty unlikely that neighbors would react the same way to the display. But in any event, I thought I’d note it, and also mention another First Amendment case involving a holiday display (Halloween, there) and personally abusive epitaphs. Thanks to Opher Banarie for the pointer.

Reducing Gun Violence By Legalizing Drugs
Can a Police Officer Lawfully Pull Over a Car For A Traffic Violation Based on an Erroneous Understanding of the Traffic Laws?