Here is the awful product that so drew so many chief prosecutors’ ire: 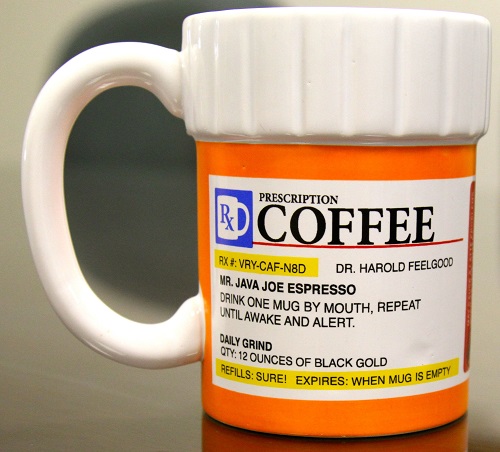 Horrified yet by the sheer viciousness of it all? I actually thought it was quite funny, but 23 state attorneys general wrote a letter to Urban Outfitters asking that the product be pulled; Urban Outfitters gave in. Here’s the AGs’ argument, likely written before their morning cups of coffee:

A Communication from the Chief Legal Officers of the Following States and Territories:

On behalf of the undersigned Attorneys General, we request that Urban Outfitters immediately cease sales of your “Prescription Line” of glasses, coasters, mugs, drink holders and related products that mimic prescription pill bottles and prescription pads.

As you may be aware, there is a national health crisis related to the abuse and diversion of prescription drugs. As Attorneys General, we have prosecuted and engaged in outreach to stop this epidemic. We are actively engaged in a campaign of environmental change to educate the public that abuse of prescription drugs is not safe simply because the medication originated from a doctor. By putting these highly recognizable labels on your products you are undermining our efforts. These products demean the thousands of deaths that occur each month in the United States from accidental overdoses.

These products are not in any way fun or humorous but make light of this rampant problem. We invite you to pull these products from your shelves and join with us to fight prescription drug abuse.

Thanks to The Arkansas Project for the pointer. From an update to that post:

Less than five minutes after posting this story, and one day after I called the [Arkansas] AG’s office three times to ask them about this matter, I received the following email from the AG’s office:

Prescription drug abuse is an epidemic in Arkansas and across the country. About one in five high school seniors in Arkansas have abused prescription drugs. The Attorney General is committed to fighting this serious problem. The line of products sold by Urban Outfitters made light of the problem and its dangerous consequences, so the AG joined with his colleagues from across the country in a bipartisan request for the company to stop selling the products. He appreciates the company’s decision to discontinue the line.

I will trust readers of this blog to draw their own conclusions about whether jokes about caffeine dependency are best met with a coordinated response from law enforcement officials in [22 states and a territory] to humorlessly “request” that a coffee cup which allegedly “makes light of prescription drug abuse” should be taken off the market.

Did the Obama Administration have a Duty to Defend DOMA?
Chalking and the First Amendment