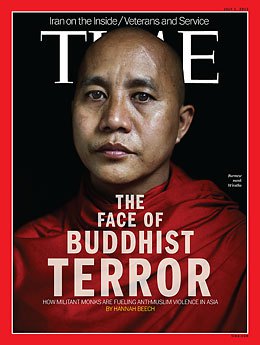 Customs department spokesman Leslie Gamini said they held the July 1 issue, because it carried a photo of a prominent Myanmar monk under the headline: “The Face of Buddhist Terror”

“By operation of law these magazines will be confiscated,” Gamini said. “We did not allow this issue to be distributed in Sri Lanka because we felt it could hurt the religious sentiments of the people.”

Buddhist-majority Sri Lanka, where tensions with Muslims and other minority religious communities have been rising, is the second country to censor the edition after Myanmar also blocked it.

The online version of the magazine is still available, however.

“A Good Musket” and Bearing Arms
More on Egypt, Constitutionalism, and Democracy