The Mifflin Street Block Party is an annual event that began in May 1969 as part of the student protest movement on the UW–Madison campus. At that time, Paul Soglin was a student protest leader at UW–Madison and a Madison alder. Soglin attended the first Mifflin Street Block Party and was arrested at the event. In 1972, Soglin was elected mayor of Madison and over the course of the next 40 years, he has served as mayor for more than 15 years during three separate periods.

In a September 10, 2011 interview with The New York Times, Soglin said of his participation in and arrest at that first Block Party: “There was an underlying theme of taking a sharp stick … and poking it in the eye of authority.” The article stated: “Mr. Soglin acknowledges that he has grown to favor ‘a sense of order.’ That was not exactly a central theme during his protest days, and it causes some amusement among plenty of free-spirited young people.” The New York Times article quoted Madison Common Council member Mike Verveer as saying, “It’s a little ironic, since it was the student vote that originally got Paul elected.”

Soglin was Madison’s mayor at the time of the 2012 Mifflin Street Block Party, which had become a controversial event subject to significant political debate in Madison. Following the block party in 2011, the Wisconsin State Journal quoted Mayor Soglin when asked about the future of the event, as declaring, “All I’m interested in is ending this thing.” Shortly after the 2011 party, an Underground employee suggested that Sconnie and Underground should sell a shirt in 2012, criticizing in a humorous manner Mayor Soglin’s opposition to the block party….

In March 2012, with controversy beginning to percolate over the upcoming May 5, 2012 block party, Sconnie and Underground decided to create and sell t-shirts and tank tops with the phrase “Sorry For Partying.” In order to make the target of their commentary clear, Sconnie and Underground sought a recognizable image of Mayor Soglin to reproduce on the shirt. After a quick internet search, they found the Soglin portrait on the City of Madison’s official internet website, www.cityofmadison.com.

Underground, in consultation with Sconnie, downloaded a digital copy of Kienitz’s Soglin photograph from the City of Madison website. Underground altered the photograph so that Mayor Soglin’s face is lime green against black, outlined in bright blue and wreathed on three sides with the phrase “Sorry For Partying,” in alternating blue, green and pink spike-fonted lettering. Here’s an example: 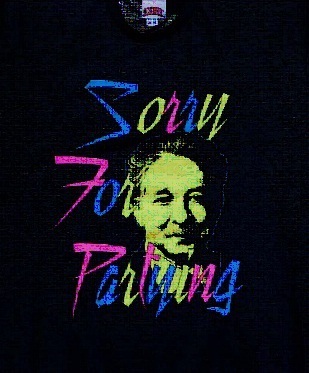 Underground screen-printed 65 tank tops and 96 t-shirts (hereafter referred to as the “SFP shirts” or “the shirts”).

The photographer who took the original Soglin photograph sued the T-shirt makers for copyright infringement. No, said the court; the use of the Soglin image was fair use and thus not infringing; check out the opinion for more details.