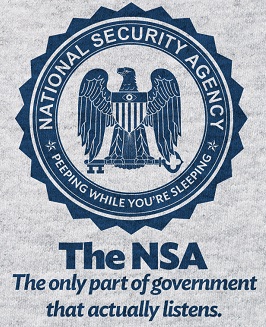 The Daily Dot reports that, an hour or two after a T-shirt designer put some shirts and bumper stickers with the above design on Zazzle, Zazzle e-mailed him saying the material was removed [UPDATE: CafePress, however, has the shirt available]:

Unfortunately, it appears that your product, The NSA, contains content that is in conflict with one or more of our acceptable content guidelines.

We will be removing this product from the Zazzle Marketplace shortly….

Unfortunately, it appears that your product, ” the nsa”, does not meet Zazzle Acceptable Content Guidelines. Specifically, your product contained content which infringes upon the intellectual property rights of National Security Agency.

We have been contacted by legal representatives from the National Security Agency, and at their request, have removed the product from the Zazzle Marketplace.

The NSA later apparently released this statement to the Daily Dot:

The NSA seal is protected by Public Law 86-36, which states that it is not permitted for “… any person to use the initials ‘NSA,’ the words ‘National Security Agency’ and the NSA seal without first acquiring written permission from the Director of NSA.”

It then wrote the Daily Dot, “NSA has not sent a cease and desist letter to Zazzle since March 2011 regarding a mug they were selling using the NSA Seal. At any time that NSA is made aware that the NSA Seal is being used without our permission, we will take appropriate actions.” This doesn’t say anything, I think, about the shirt and the bumper sticker.

I’m pretty sure that the T-shirt design given above is not reasonably calculated to convey the impression that its use of “NSA” is approved by the NSA, so the statute doesn’t prohibit it. (I think that, if a statute did prohibit it, the statute would be unconstitutional, because such parodic, nonmisleading uses of the logo are protected by the First Amendment, but the issue doesn’t arise here given the limitation in the statute.) If someone from the NSA did indeed try to block sale of the T-shirt, and quoted the statute the way that was later quoted by the Daily Dot, that strikes me as quite improper.

Thanks to Max Bauer for the pointer.