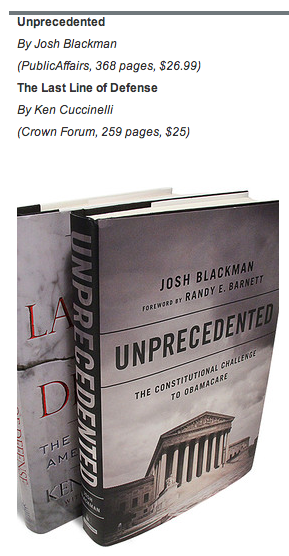 Today the Wall Street Journal reviewed Unprecedented, along with Virginia Attorney General Ken Cuccinelli’s new book, the Last Line of Defense, as part of a discussion of the role of the states in combatting the sprawling federal government. The Journal said the two were “excellent books.”

Here is a flavor:

Republican governors and attorneys general have become the most effective opponents of Obamacare and federal overreach in general. Two excellent books, one published earlier this year and the other just out, give detailed accounts of the states’ fight to defeat Obamacare and preserve the Constitution’s limits on federal power.

Both Virginia Attorney General Ken Cuccinelli, a key leader of the state fight, and South Texas College of Law professor Josh Blackman argue that the majority opinion written by Mr. Roberts was so finely balanced as to render the act ultimately unworkable.

Plus a mention of Randy’s work for NFIB:

Georgetown professor Randy Barnett, whose Jones Day team of lawyers represented the National Federation of Independent Business in its lawsuit, argues in the foreword to the Blackman book that the Roberts rulings against the coercion of the states and the original claims for the mandate—before it was redefined as a tax—were in fact big victories for the Constitution’s doctrine of limited federal powers.

Megan McArdle on Women, Professional Education, Work and More
It’s Such a Great TV Show That Even The Criminals Like It