(For an introduction to this series of posts, see here.)

1. Say that you feel a religious obligation to use a prohibited drug — hoasca (the drug at issue in Gonzales v. O Centro Espírita Beneficente União do Vegetal (2006)), peyote, marijuana, or LSD.

Or say that you’re a landlord who feels a religious obligation not to rent to unmarried couples (or same-sex couples), even though state law bars marital status discrimination or sexual orientation discrimination in housing.

Should you be entitled to an exemption from the generally applicable law, because of your religious beliefs? Or should the government be free to apply the law to you just as it does to others?

Until about 1960 (more or less), the rule was what one might call the statute-by-statute exemption model — religious objectors got exemptions if and only if the statute provided for one, as, for instance, draft law historically had. Judges got into the act only insofar as they created common-law exemptions from judge-made common-law rules, and these exemptions were trumpable by statute. The clergy-penitent privilege, which is an exception from the duty to testify, was one example.

To distinguish cases where religious objectors win from those in which they lose, the Sherbert/Yoder-era Court used what it called “strict scrutiny” when the law imposed a “substantial burden” on people’s religious beliefs (e.g., when it banned behavior that the objectors saw as religiously compelled, or mandated behavior that the objectors saw as religiously prohibited). Under this strict scrutiny, religious objectors were to be given an exemption, unless denying the exemption was the least restrictive means of serving a compelling government interest.

But while the strict scrutiny test in race and free speech cases was generally seen as “strict in theory, fatal in fact” (Gerry Gunther’s phrase), almost always invalidating the government law, in religious freedom cases it was “strict in theory, feeble in fact” (Larry Sager and Chris Eisgruber’s phrase). The government usually won, and religious objectors won only rarely.

Then in 1990, the Court changed course: In Employment Division v. Smith, a 5-Justice majority returned to the statute-by-statute exemption regime, and rejected the constitutional exemption regime. So long as a law doesn’t discriminate against religious objectors, but generally applies to people regardless of their religiosity, it’s constitutionally valid. If religious objectors want an exemption, they need to go to the legislature. (This is an oversimplification, but let’s go with it for now.)

Smith was broadly condemned, both by the Left and the Right. That coalition has since largely fallen apart, but it was strong back then: In 1993, Congress enacted the Religious Freedom Restoration Act, which gave religious objectors a statutory presumptive entitlement to exemption from generally applicable laws (subject to strict scrutiny). “Government may substantially burden a person’s exercise of religion only if it demonstrates that application of the burden to the person . . . is the least restrictive means of furthering [a] compelling governmental interest.” The vote in the House was unanimous, and in the Senate was 97-3.

RFRA was meant to apply to all branches of government, and both to federal and state law. In City of Boerne v. Flores (1997), the Supreme Court held that RFRA exceeded federal power when applied to state laws, but didn’t touch it as to federal law. Since 1997 (and in some measure before), about a dozen states enacted similar state-level RFRAs as to state law, and about a dozen more interpreted their state constitutions to follow the Sherbert model rather than the Smith model.

Therefore, the rule now is that there is a religious exemption regime as to federal statutes (under the federal RFRA), and as to state statutes in the about half the states that have state RFRAs or state constitutional exemption regimes. Religious objectors in those jurisdictions may demand exemptions from generally applicable laws that substantially burden the objectors’ practice, which the government must grant unless it can show that applying the laws is the least restrictive means of serving a compelling government interest.

Hobby Lobby involves a federal statute and federal regulations, so therefore the federal RFRA is what matters. Still, I thought it would be helpful to mention the state RFRAs, since they come up in all sorts of other religious exemption controversies; here is a map of which states are covered by state RFRAs or by state constitutional exemption regimes: 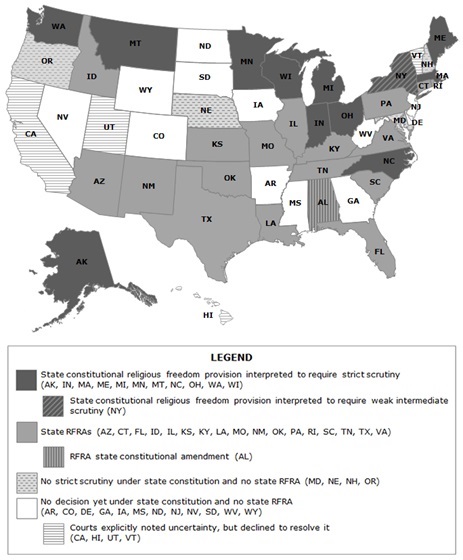 2. In interpreting the terms of RFRA — such as “substantial burden,” “compelling government interest,” and “least restrictive means” — courts look to Sherbert/Yoder-era Free Exercise Clause caselaw. The “findings” section of RFRA states that “the compelling interest test as set forth in prior Federal court rulings is a workable test for striking sensible balances between religious liberty and competing prior governmental interests” (emphasis added), and cites Sherbert and Yoder favorably. And the whole point of RFRA was to “restor[e]” a body of rulings that were overturned by Smith — rulings that recognized a constitutional right to presumptive exemptions from generally applicable laws.

Unfortunately, this body of preexisting caselaw is not terribly broad or deep. As we’ll see later, for instance, it tells us less than we’d like to know about what counts as a compelling interest. But what counts as a substantial burden is somewhat clearer; we’ll see this in more detail in a later post, but for now, note that the following all constitute a substantial burden:

Recall, though, that a finding of substantial burden on sincere religious beliefs simply shifts the burden to the government: The government may still justify the burden by showing that applying the law to the objectors is the least restrictive means of serving a compelling government interest.