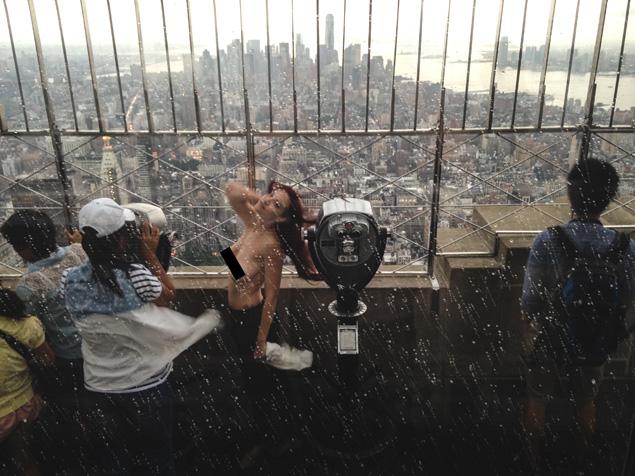 But that, on its face, simply reserves ESB’s right to kick people out, or not let them in. It doesn’t purport to legally limit the scope of visitors’ conduct, especially since the word “objectionable” is so vague that it can’t be understood as anything other than “We can kick you out if we don’t like what you’re doing.” Then the Complaint says,

In addition, ESB has specific rules that it requires commercial photographers and filmmakers to follow in order to apply for and obtain permission from ESB to use the Building and the Observatory in commercial film and photo shoots. As set forth on the section of ESB’s official website titled “Film & Photo Shoots”:

The Empire State Building receives requests to use its trademarked image in films and photo shoots throughout the year.

We will consider requests that:
• Showcase ESB positively, respectfully and responsibly
• Feature ESB, and not just views/skyline shots from its Observatory

But the Complaint doesn’t claim that these rules were made known to Henson. And while commercial use of the building’s trademarks might be trademark infringement even without notice to the user, the photos shown in the Daily News article don’t, in my view, infringe the building’s trademarks or even use them. (Indeed, the owners didn’t claim trademark infringement in their complaint.) So it seems that the trademark use policy wouldn’t even apply to Henson’s behavior.

Indeed, if the Building owners were right in their legal analysis, they could sue people for $1.1 million not just for taking topless photos, but for taking any photos that are seen as “objectionable,” or that don’t “[s]howcase ESB positively [and] respectfully.” The Building owners might be able to impose such obligations on visitors, for instance by requiring all visitors to specifically agree to them (and defining the obligations more precisely). But the general policies they mention in the Complaint don’t, I think, impose any such general obligations as to conduct such as Henson’s.

Note that whether property owners can ban female toplessness from a place of public accommodation if they don’t ban male toplessness would be an interesting question of public accommodation discrimination law. I’m inclined to say that, just as many courts have concluded that Title VII’s ban on sex discrimination in employment doesn’t necessarily preclude different dress codes for male and female employees, courts might conclude likewise as to public accommodation antidiscrimination law and different nudity prohibitions for male and female visitors; but it’s not clear. It’s also not clear whether the Building owners do have different rules for men and women; they might prohibit male toplessness, too. (Compare People v. Santorelli (1992), which held that female toplessness in public isn’t generally illegal in New York, but avoided reaching the Equal Protection Clause challenge to the statute involved there.)

UPDATE: Words from the photographer, in the Village Voice:

“I don’t know,” [Henson] told the Voice, thoughtfully. “I would really like to take this seriously, but it just feels like somebody got drunk last night and said, ‘Fuck it, let’s sue him for a million dollars.'”