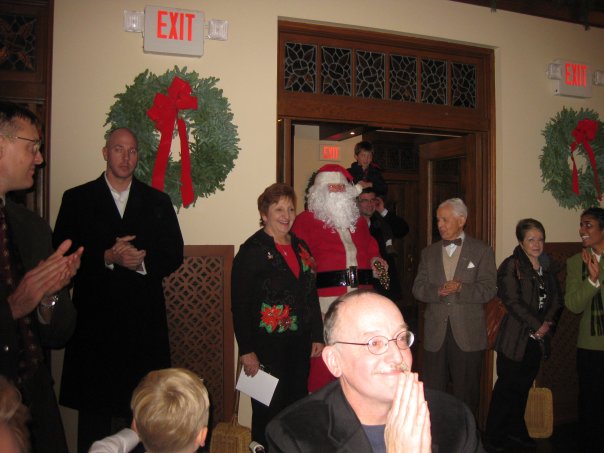 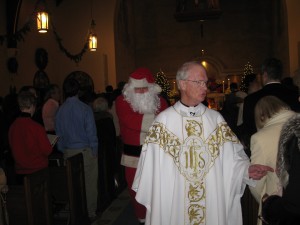 This is not inconsistent with a religious understanding of Christmas, or at least it need not be thought necessarily inconsistent. The best way to think of them is as layers of belief, with core doctrinal religious beliefs being the most deeply held but also the least likely to be shared – and a gradual set of more widely shared but less deeply doctrinally-insistent beliefs in the outer circle.  For many people, it is possible to hold both a deep, doctrinally driven set of theological beliefs, while simultaneously holding a set of shallower, more widely shared set of beliefs, without thinking that it is particularly inconsistent or hypocritical.  The older American understanding of what it means to wish someone a Merry Christmas – that it allows people to fit it into wherever they happen to fit within the layers of belief and sentiment, ranging from a literal “Jesus Christ is born today” to “Hey, it’s a good moment to think about goodness and charity and kindness,” is the best way to approach it, it seems to me.  It is an expeditious ambiguity that allows both understandings simultaneously – even by the same person – and it would be good if it took hold again, rather than the trend toward a more literal understanding, which leads to a greater religious piety, perhaps, but also to greater religious communalism.

Of course, there’s an easier way to understand Santa Claus, which is best put by that canonical work, A Christmas Story.  There are the minor mythological deities – the Easter Bunny or the Tooth Fairy – but Santa Claus is supremo among the pagan deities.

Or you might just say that Santa Claus is the apex deity of sentimental capitalism.

On any of these interpretations, however, his appearance at the children’s Mass is as religious outsider – part of the circle of sentimental, ecumenical, good fellowship of the season, yes, but not religious in a sense relevant to a Catholic Mass.  Although I assumed this was the interpretation of Santa Claus in church, the first time I saw him appear in a Mass was a couple of years ago, when he appeared on the altar and processed out with the priest and servers and others of the serving party.  This struck me as a more serious religious statement, and one that – in the Mormon church where I grew up, for example, it would have seemed quite out of place.  I imagine that would be true of many Protestant churches as well, including ones that “process.”

Saint Nicholas.  An alternative Catholic reading of Santa Claus might argue that Santa Claus should not only be welcome in church, but welcome on the altar, and indeed, I suppose, if enacted by a priest, able to do Mass.  After all, this is Saint Nicholas.  Why shouldn’t he serve in Mass?  One might see the incorporation of St. Nick into the service, and not just as an appearance at the end of Mass, as an attempt by the Church to draw Santa Claus back into a genuinely Christian, indeed Catholic, role.  Putting the Catholic Saint back into Santa.

I wonder if there was perhaps some discussion of the symbolism involved in actually having Santa Claus involved on the altar, in the service, and a conclusion that the nearly inevitable message conveyed is not the re-churching of Santa Claus, but instead the slightly-secularizing of the service itself.  That, of course, is a question of the interpretation of the message, and is a question of internal religious interpretation.  But there is a further aspect to it, viz., that we should not overlook the moral, and indeed religious, value of loose, theologically disconnected symbols that can be embraced or celebrated by those who are not just not Catholic, but not Christian, but for whom Santa Claus can provide a relaxed point of reference.  A deliberately ambiguous and “shallow” reference: sometimes superficiality is a point of virtue.

Update: Re Garrison Keillor … I decided to avoid attacking Keillor here, though of course I was tempted. But looking over his particularly nasty rant, I think that his real target is not the Jewish popular song re-cast of the American Christmas, but instead the PC rewrite of Christmas in the nominally Christian churches. He complains about the rewrite of the Lutheranism of his childhood, not by Berlin, but by the relentless – not secularizers but instead religious universalizers – de-traditionalizing of the PC Christian churches. But being a man of the left, he finds it hard to attack that alone, and so instead takes on a combined target. That is perhaps a charitable interpretation of Keillor, but hey, it’s Christmas.