[UPDATE: See the correction from the St. Louis Dispatch below:]

That’s the caption to the photograph below, and the rest of the St. Louis Post-Dispatch story in which the photograph appears echoes this. (“While he was [at the St. Louis Police Academy], Carnahan tested his own acuity with a firearm — stopping the paper suspect dead in its tracks. Using what appears to be a 9mm pistol, Carnahan landed three shots squarely in the center of the target, two of which were pretty close — if not right on — the bullseye.”) 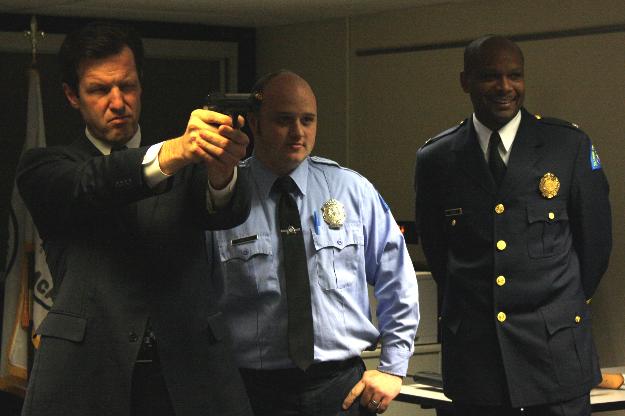 But 24th State notes some odd items about this: Is Carnahan really shooting a 9mm semiautomatic indoors, with no hearing protection and no eye protection for himself and the watching police officers? (For those who don’t know, firearms discharges are loud enough to risk hearing damage, especially indoors; and flying hot brass ejected by a semiautomatic can injure your and your neighbors’ eyes.) Was there really a photographer downrange of the shooter, even at an angle?

I set aside 24th State’s complaint that Carnahan seems to have his eyes closed; perhaps the photo was taken while he was blinking. But even without that, it does appear that either (1) Carnahan and both police officers were violating some of the most basic safety rules, or (2) the photo is not actually of Rep. Carnahan shooting.

Thanks to InstaPundit for the pointer.

UPDATE: D’oh! I inadvertently wrote Senator Carnahan, but should have written Representative Carnahan; I’ve now corrected this. Many thanks to commenter ruuffles for promptly pointing this out.

CORRECTION FROM THE ST. LOUIS POST-DISPATCH: A gracious correction from the author:

Those in our comments section who questioned whether U.S. Rep. Russ Carnahan really was firing a pistol in a photo at the police academy were right on target.

I, however, was not.

But Carnahan was not using a real gun — what I guessed appeared to be 9mm pistol.

According to the Police Department, the St. Louis Democrat was actually at a “shooting simulator” that uses infrared light — not bullets –to interact with the target.

His aim was solid — he hit the target three out of three times — but Carnahan was not using an actual firearm.

I’ll take the blame on this one. Looking back, there are clear signs in the photograph — no goggles, no ear protection — that the congressman was not using live ammo.

When Carnahan himself mentioned his sharpshooting to me in a brief conversation at City Hall on Friday, he made no mention of a simulator. Nor did his office when they sent me the photos.

Of course, a quick phone call to the Police Department would have revealed that the congressman was not using a genuine firearm — and that was a phone call I should have made.

Thanks to commenter Stephen Lathrop for the pointer.