Judicial Biography Needed: Every modern Supreme Court Justice becomes the subject of one or more judicial biographies. It’s a different picture in the court of appeals. Circuit Court Judges occasionally become the subject of a biography, but coverage is spotty. Of course, Gerald Gunther brought us the fantastic Learned Hand biography. And other judges have also been the subjects of biographies of varying qualities, including Frank Johnson, Skelly Wright, Bill Hastie, John Biggs, and Harold Medina, just to name a few.

But who will write a biography of Judge Henry J. Friendly? As far as I know, no one has written a biography of Friendly. But Judge Friendly probably had the most lasting influence of any Circuit Judge of the 1960s and 1970s. Also, he seems to have been a fascinating and brilliant figure. Plus, his law clerks have gone on to great prominence, making the story of the judge all the more interesting. Altogether, Judge Friendly seems like a natural subject for a biography. But is anyone planning to write one? Someone should. (Full confession: I have sometimes thought it would be cool to try myself, but I have absolutely no training in such things so I doubt I would ever try.)

I’m pleased to report that is about to change with this book: 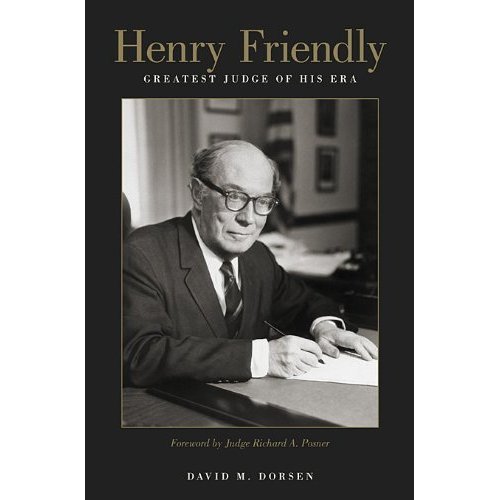 Ron Collins has the scoop over at SCOTUSblog:

Late next March a biography of Judge Friendly is scheduled to be published. The author is David M. Dorsen, a seasoned trial lawyer and Harvard Law graduate who served as an editor on the Harvard Law Review, followed by stints as (among other things) an Assistant U.S. Attorney for the Southern District of New York (1964-1969) and Assistant Chief Counsel to the Senate Select Committee on Presidential Campaign Activities (1973-1974).

The forthcoming five-hundred-plus-page biography is titled Henry Friendly: Greatest Judge of His Era. Belknap Press of Harvard University Press is the publisher and Judge Richard Posner has apparently written a foreword to the book, which speaks well for the undertaking. Pace Law Review recently published a sampling of Dorsen’s treatment of his subject.

You can pre-order the book at Amazon here.