Speaking about the need to develop new sources of American energy in Largo, Md., Obama used our 19th president to illustrate a failure of forward-thinking leadership.

“One of my predecessors, President Rutherford B. Hayes, reportedly said about the telephone: ‘It’s a great invention but who would ever want to use one?'” Obama said. “That’s why he’s not on Mt. Rushmore.”

“He’s looking backwards, he’s not looking forward. He’s explaining why we can’t do something instead of why we can do something,” Obama said. “The point is there will always be cynics and naysayers.”

The telephone quip is often attributed to President Hayes, but it turns out to be completely false — a “four pinocchio” falsehood.  As New York reports, historians have a different view of the 19th president who, it turns out, was quite taken by the telephone and quite supportive of new technologies.

[Rutherford B. Hayes Presidential Center’s Nan] Card noted, Hayes was not only the first president to have a telephone in the White House, but he was also the first to use the typewriter, and he had Thomas Edison come to the White House to demonstrate the phonograph. “So I think he was pretty much cutting edge,” Card insisted, “maybe just the opposite of what President Obama had to say there.” 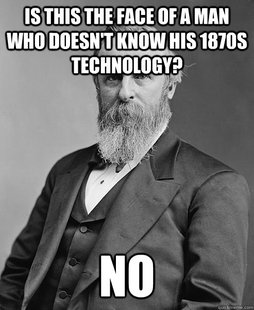