As people discuss whether Justice Roberts avoided politics by siding with the left side of the Court or instead yielded to political pressure to change his vote, I want to point to an article that I posted on SSRN a couple of days ago.  It shows that Supreme Court justices do tend to act politically in one respect: They tend to retire or take senior status strategically to favor the party of the president who appointed them.

My co-author, Rafe Stolzenberg, and I also plot how much older the justices have become in the last half-century. 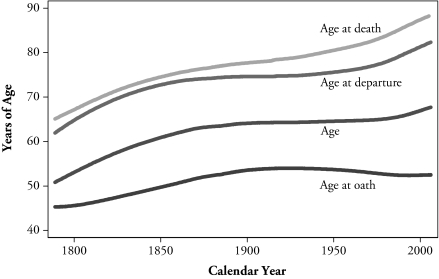 Note that, while the age at oath has changed little in the last 150 years, the age of the sitting justices and the eventual age at departure have both increased in the last half-century (the latter markedly).

We also made a large number of methodological improvements on prior work. For example, most studies had assumed that the longer justices served, the more likely they were to retire. If that were true, that would be a strange job. In most jobs, once people settle in, they are more likely to stay, rather than more likely to leave. Indeed, our analysis shows that it is not until justices reach their 25th year of tenure on the Court that an additional year on the Court makes them more likely to retire. Before that, each additional year of service makes them instead more likely to stay on the Court. Some of the odd results of prior studies on strategic retirement might in part reflect their using a linear version of the variable longevity of tenure on the Court. We used fractional polynomials to (nearly optimally) determine the shape of the longevity curve to fit.

Moreover, we introduce the first good measures of justices’ health when they retire. We know the date of death for all retirees except the most recent ones. There is substantial demographic research suggesting that knowing the years left to live is an excellent measure of both actual and subjective health on the date of retirement.

Our paper, “Retirement and Death in Office of U.S. Supreme Court Justices,” can be downloaded at SSRN.

UPDATE: On the effect of more years on the job:

But Obama Said It Wasn’t A Tax — Was the Supreme Court Unfair or Unprincipled for Saying It Was?
Three Excellent Posts on Aspects of the ACA Case