By Prof. Christopher Sprigman (Virginia), guest-blogging on October 18, 2012 7:35 am in Copyright, Patent Law

In our last post, we discussed a variety of industries in which we see creativity without much resort to patent or copyright law. And we offered some explanations for how low-IP creativity works, such as informal social norms and first mover advantage. In today’s post, we look at a couple of additional ways in which low-IP industries sustain creativity without heavy reliance on IP.  One has to do with the difference between product and performance.  The other relates to the surprising power of brands.

To see our first point, think about innovation in the world of cuisine. Recipes are widely copied – a fact you can confirm by looking at websites like RecipeSource and Cooks.com, which contain thousands of recipes that people have posted, many taken from cookbooks and cooking magazines. And recipes, for reasons we explained earlier, are not covered by copyright. And yet there are a lot of new recipes – cooks continue to innovate in this area despite others’ freedom to copy. Why? Well, on important reason is that the culinary industry doesn’t really rely very much on the recipe as a product. It relies, rather, on revenues from things that are harder to copy. Like restaurants. The quality of a recipe’s preparation in a great restaurant, the wonderful ambiance, the service, the entire experience of fine dining – these are all very difficult and expensive to copy. Any local sushi place can offer a miso-glazed black cod. But have you had the original at Nobu Matsuhisa’s signature “Matsuhisa” restaurant? Oh boy.

The strategy of sustaining innovation by shifting emphasis from product to performance is not confined to cuisine. The music industry – which has traditionally relied heavily on copyright law but is having an increasingly difficult time sustaining a copyright-centered business model – is headed in the same direction. The live concert, which is really selling an experience rather than a product, is much harder to copy than a CD or digital download. And so live music is re-emerging as a growth area. (For an interesting recent discussion of this, see Megan McArdle in The Daily Beast here.)

Now, we suspect that live music will never replace all the revenue that the music industry has lost to online piracy. But it may not have to.  Digital technologies have made high-quality recording much cheaper. And distributing those recordings has gotten cheaper too. Which means that today’s musicians can carve out a sustainable career at a smaller scale than was previously possible. And in this new musical economy, revenue from the live show is perhaps the most important element of a musician’s success.

So, on to the power of brands. That power is very apparent in any big drugstore. Walk into a CVS, and you can buy, for $20.99, 300 tablets of Advil brand ibuprofen. That is just under $0.70 per tablet. The CVS private label ibuprofen—which contains exactly the same dosage of the same medicine—costs $17.79 for 750 tablets, or about $0.24 per tablet. The Advil brand ibuprofen, in other words, is almost three times as expensive as the CVS ibuprofen, despite the fact that they are functionally indistinguishable. 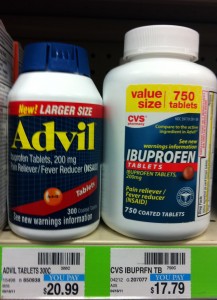 As this shows, brands have a strong power over price. And as a result, they wield an unexpected ability to spur innovation. The story of ibuprofen can help explain this relationship. Ibuprofen was invented in the early 1960s by the UK firm Boots, which runs a large chain of drugstores. First patented in 1961, it was introduced in the United States as a prescription drug in 1974. In 1984, the FDA approved ibuprofen for over-the-counter (OTC) sale. That same year, Pfizer reached a license agreement with Boots and introduced OTC ibuprofen under the brand name “Advil.” Boots’s US patent expired in 1986, and soon after other brands of ibuprofen entered the market.

So in all, Pfizer’s Advil brand of ibuprofen had less than two years of market exclusivity in the United States. After those two years, many competitors jumped in. And yet today, almost 25 years after the expiration of the ibuprofen patent, Advil still owns 51% of the market. That’s more than twice the combined share of all generic ibuprofen products, despite the fact that Advil is functionally equivalent to its rivals and quite a bit more expensive.

Why are consumers willing to pay so much for certain brands? There is surprisingly little consensus among researchers about this. Part of the brand premium is surely based on perceived quality differences, and some studies suggest that beliefs about quality may account for perhaps 20% of the difference. But this rationale makes less sense in the case of a basic pain reliever like ibuprofen, where the FDA certifies that the generic drug is as safe and effective as the branded pill. The brand itself seems to have some effect on the willingness of consumers to pay more.

What’s the upshot? Brands can keep prices high and give firms large and resilient market shares. That brands can have such huge effects explains why companies spend so much money promoting them and designing nifty names and symbols. This much is well known. But the power of brands also has important implications for innovation. If an innovator can link her innovation to a successful brand, she can maintain pricing power even after her innovation is copied. This is the key takeaway of the ibuprofen story. The patent on Advil gave only two years of monopoly control. Yet decades later, Advil still dominates the market for ibuprofen. This suggests that whatever the period of exclusivity, if the brand is sufficiently well-established the innovator can continue to profit—substantially—even after the entry of copies, and even if the copies are quite literally identical products. The brand, in effect, can substitute for the protection against copies offered by patent or copyright.

This is a big topic, and exactly how brands do this is poorly understood. Which means we should try to understand it better. Brands serve as handy identifiers that help consumers more efficiently select the product they want when they’re out shopping. But brands also appear to have an important and unappreciated role in sparking innovation.