By Josh Blackman, guest-blogging on September 8, 2013 9:01 pm in Unprecedented

Nearly everything written about calls for Justice Kagan to recuse in NFIB v. Sebelius focused on whether she had anything to do with the Obamacare litigation while she was serving as Solicitor General. The answer to this question was straightforward. As I discussed in Unprecedented–and based on stuff I couldn’t write–she had absolutely nothing to do with the case. And this was no accident! At every juncture, she walled herself off as SG, so she would have no involvement with the Affordable Care Act. 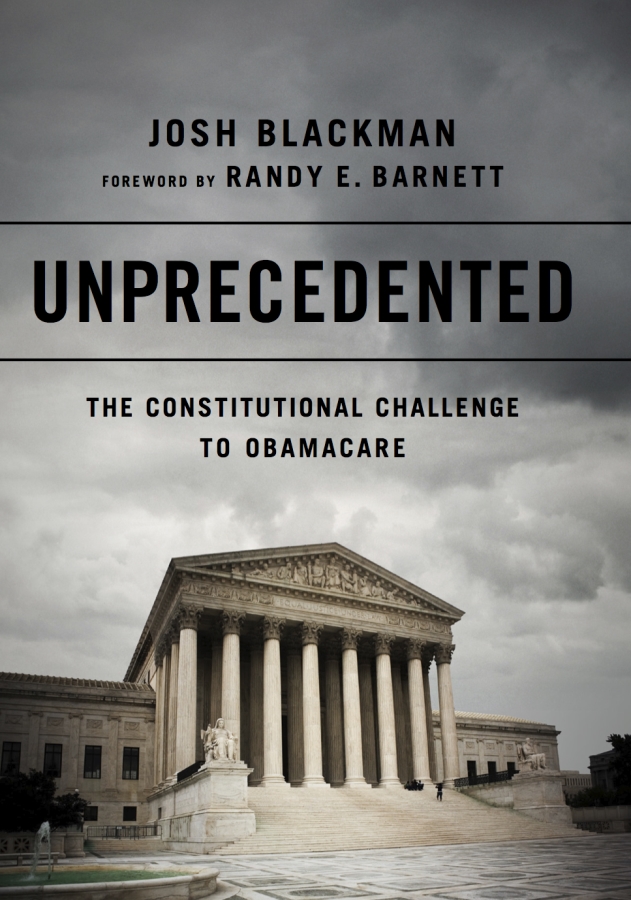 But the most important question that no one asked her, is why did she have nothing to do with the most significant case of the Obama presidency.

You can go through the FOIA’d emails yourself for clues. Here are a few highlights.

As early as January 8, 2010, two months before the ACA cleared the House, and three months before Justice Stevens announced his retirement, Kagan, a front-runner for the next vacancy on the Supreme Court, was already sectioning herself off from what would become the most important case of the Roberts Court.

Brian Hauck, a senior counsel at the Justice Department, emailed Deputy Solicitor General Neal Katyal about putting together a team to defend the inevitable suits against Obamacare. Katyal replied, “Absolutely right on. Let’s crush them. I’ll speak with Elena [Kagan] and designate someone.”

Katyal forwarded that message to his boss, Solicitor General Elena Kagan, and wrote, “I am happy to do this if you are ok with it . . . or both of us.” Three minutes later, Kagan replied with four words that would characterize her approach to ACA: “You should do it.” The future justice was already sectioning herself off from what would become the most important case of the Roberts Court. Neal Katyal wrote back to Hauck,  “Elena would definitely like OSG [Office of the Solicitor General] to be involved in this set of issues. I will handle this myself, along with an Assistant from my office, and we will bring Elena in as needed.” 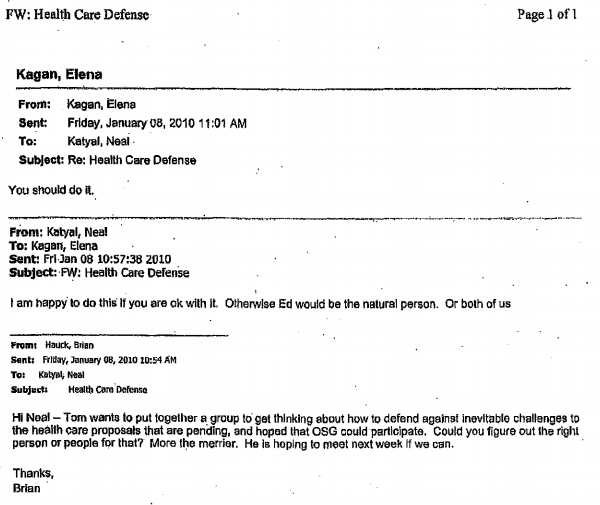 On March 21, 2010, on the eve of passage in the House–amidst some celebratory emails with Professor Larry Tribe about the impending vote (Kagan wrote, “I hear they have the votes, Larry!!”)–Justice Kagan took further steps to section herself off from the litigation.  Associate Attorney General Tom Perrelli sent an email to a number of Justice Department attorneys, including Ian Gershengorn, who would argue all of the Health Care Cases in the district courts, and Neal Katyal, who would argue the cases in the courts of appeals. Perrelli called for a meeting at the White House “with some of the health care policy team tomorrow at 4 to help us prepare for litigation.” He asked for everyone’s information quickly, as the White House “wants it tonight, if possible.”

At 6:19 pm, Katyal forwarded the invitation to Kagan and wrote, “This is the first I’ve heard of this. I think you should go, no? I will, regardless, but feel like this is litigation of singular importance.” One minute later, at 6:20 pm, without hesitation, Kagan replied: “What’s your phone number?” At 6:22 pm, Katyal replied with his phone number and no other text. 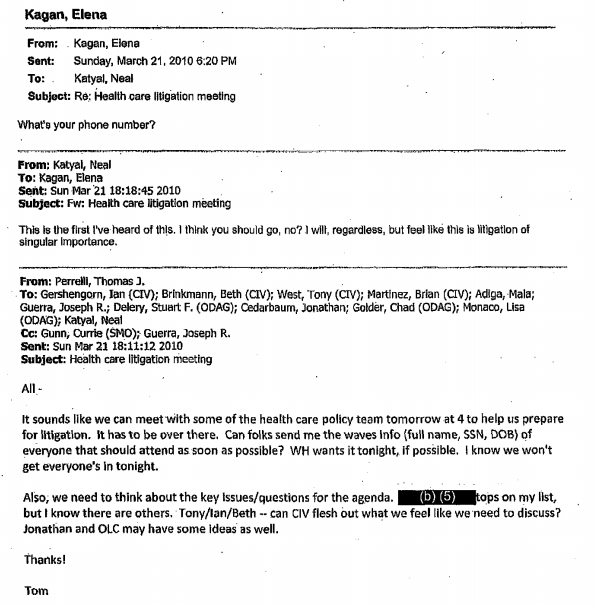 We can use our imaginations as to how that conversation went. Kagan would not discuss this critical matter over email, where a future Freedom of Information Act request could/would reveal it. Kagan made the conscious decision not to be involved with a case she knew she could likely hear as a justice. She was involved in several other cases of much less importance, for which she ultimately recused. But not this one.

After Kagan’s nomination, internal emails show she sought to coordinate information regarding any suggestion that she was involved in the case. On May 17, Tracy Schmaler, the chief spokeswoman for the DOJ, asked Neal Katyal if “Elena [has] been involved in any of [the health care case litigation] to the extent SG office was consulted? Know you’ve been point but expect I’ll get this q[uestion].” Katyal replied, one minute later, “No, she never has been involved in any of it. I’ve run it for the Office, and have never discussed the issues with her one bit.” No doubt, Katyal understood Kagan’s position on this matter. 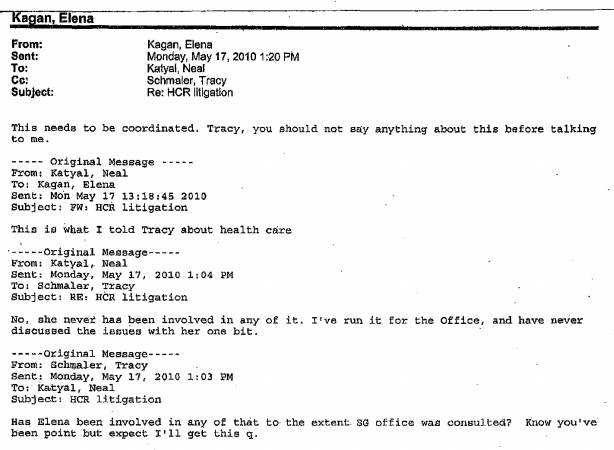 Fifteen minutes later, Katyal forwarded that message to Kagan, adding, “This is what I told [her] about health care.” One minute later, Kagan replied, and copied Schmaler. “This needs to be coordinated Tracy, you should not say anything about this before talking to me.” A few minutes later, Katyal replied, “I have received a plethora of inquiries . . . about a whole variety of things like the below for several days now”—no doubt since Kagan’s nomination a week earlier. “Most of them aren’t that sensitive so I don’t pass them on to you. I am very happy to just stay out of this and have you field these inquiries if you’d like. Just let me know.”

On June 15, 2010, Katyal emailed Kagan, whose confirmation hearing was still weeks away. Attorney General Holder, he told her, “just told me that he expects a big story coming out shortly about whether you are recused in health care litigation. I went over the timing and that you have been walled off from Day One.” The walling likely off took place after Kagan asked for Katyal’s telephone number a year earlier. Minutes later, Kagan forwarded that message to several undisclosed recipients not working for the government (that’s why their addresses are redacted).

Kagan would never publicly offer any rationale for why she walled herself off from this case.  It’s difficult to think of a valid reason. She was the Solicitor General. There was no apparent conflict of interest, or reason for disqualification. She was the most important advocate in the United States Government, whom the President entrusted with the defense of federal laws before the Supreme Court (she ably defended many other federal laws during her brief stint as SG). For absolutely no articulated reason, she delegated entirely the case to the able hands of  Deputy Solicitor General Neal Katyal. This is the pivotal question that would have offered a window in Elena Kagan’s essence.

This question was never posed during her breezy confirmation hearing, at which she was able to clearly state that she had nothing to do with the Obamacare litigation. In a letter Kagan wrote in response to last-minute questions from Senate Republicans following her confirmation hearing, she explained that she had no reason to recuse: “In Florida v. U.S. Department of Health and Human Services, I neither served as counsel of record nor played any substantial role,” she wrote. Kagan’s actions as SG ensured that she could write that pivotal sentence.

So why didn’t she participate in the case?  Dahlia Lithwick’s comments from November 2011 were on target:

If anything, the fact that then-Solicitor General Kagan went out of her way not to participate in the meetings and strategy sessions surrounding the health care litigation suggests that she fully understands that appearance of improper conduct in fact counts for as much as actual misconduct. She was at pains to distance herself from this case because it would have looked bad.

But Lithwick’s comment still begs the question. Why on earth “would it have looked bad” for the Solicitor General to be involved in the most important case the United States has argued in a decade, where the entire DOJ was coordinating a defense from day one?

The only people it could have “looked bad” for would be members of the Senate Judiciary Committee. She knew better than to be involved in this case. As Kagan told  Katyal, “You should do it.”

Update: In response to some of the comments, let me make clarify one point about the import of the “you should do it” comment.  On January 8, Katyal wrote to Kagan:

“I am happy to do this if you are ok with it. Otherwise Ed [Kneedler] would be the natural person. Or both of us.”

Above, I used ellipsis to omit the second sentence. I did not mean to suggest that the “or both of us” referred to Katyal and Kagan. It referred to Katyal and/or Kneedler. In response, Kagan wrote “you should do it,” referring to only Katyal, and not Kneedler. Kagan made no mention that she wanted to do anything here herself. In his later email, Katyal wrote “I will handle this myself, along with an Assistant from my office, and we will bring Elena in as needed.” That Assistant may or may not have been Kneedler.

Update 2: In response to a comment from Orin, that echoes many of the comments below, I added this response:

Call me naive for questioning why someone confirmed as Solicitor General puts her own personal concerns about possibly becoming a Supreme Court justice and deciding a really important case, ahead of the job she took an oath to perform. Especially when the deputy the SG has charged to work on the case, who was closer to it than any of us, strongly suggests that she attend a meeting at the White House, of all places.

Though maybe it is a Washington thing to always work for your next job, not your present job. (I would submit that Solicitor General Verrilli did not adopt that approach in NFIB).

From the  comments, I gather the vast majority think, “so what.” A minority of comments suggest that following an oath is important to maintain the public trust. I think your take on this question probably determines whether you think this is an issue, or a non-issue.