I haven’t blogged recently on judicial decisions considering the mosaic theory of the Fourth Amendment. As regular readers will recall, the “mosaic theory” is a term for the idea that long-term monitoring of a suspect can be a Fourth Amendment search even if short-term monitoring is not. Under this approach, which was suggested by the concurring opinions in United States v. Jones, surveillance and analysis of a suspect is outside the Fourth Amendment until it reaches some point when it has gone on for too long, has created a full picture of a person’s life (the mosaic), and therefore becomes a search that must be justified under the Fourth Amendment. I think the mosaic approach is a misstep for reasons I elaborated on in this article. And the handful of lower courts to have considered the theory since Jones mostly have not adopted it, either because they found it unpersuasive, because they distinguished Jones on the facts, or because they avoided the question under the good-faith exception to the exclusionary rule. See, e.g., United States v. Graham, 846 F.Supp.2d 384 (D.Md. 2012).

First, today in United States v. Rigmaiden (D. Ariz. May 8, 2013), Judge Campbell held that the third-party doctrine applies to both cell-site information collected over 38 days and websurfing destination IP address information that collected 1.8 million destination IP addresses. Judge Campbell held that the mosaic theory did not apply when the [...]

On Tuesday, DOJ filed a brief in the United States District Court for the District of Columbia in United States v. Antoine Jones, on remand from the Supreme Court, on the question of whether cell-site location information is protected under the Fourth Amendment. It’s a good brief, I think, and I was particularly intrigued by the appendices. The appendices included two recent unpublished federal district court decisions on Fourth Amendment protection for cell-site data. To my knowledge, neither opinion has been public before — or if they were public, they are not on Westlaw. Here they are for those interested:

1) United States v. Gordon (D.D.C. February 2012) (Urbina, J.) (ruling, shortly after the Supreme Court’s decision in Jones, that cell-site information is not protected by the Fourth Amendment because Smith v. Maryland is controlling)

2) In re Application of the United States (D.D.C. October 2011) (Lamberth, J.) (redacted version of ruling filed under seal) (ruling after the D.C. Circuit’s decision in Maynard but before Jones that cell-site information is not protected under Smith v. Maryland, and distinguishing Maynard on the ground that cell-site data is much less revealing and detailed about a person’s life than is GPS information). [...]

I recently blogged about United States v. Skinner, the new Sixth Circuit decision concluding that the Fourth Amendment does not protect location information obtained from a cell phone. Skinner has been getting a lot of attention in the blogosphere, in part because the facts are so vague, so decided to take a closer look at the case to see what I could learn about the facts in dispute.

Here’s what I learned. First, here’s the first of the two court orders that the government obtained to compel the phone company to reveal location information. It’s one of the “hybrid” orders that DOJ has tried to use (or at least was using as of 2006, the date of the order) that combines several statutory authorities at once — pen trap, 2703(d), subpoena, etc. Putting aside the open question of the legality of such hybrid orders under statutory laws, the important part for Fourth Amendment purposes is what the court order allows the government to do in terms of location information. The order requires the phone company to provide the government with the following: 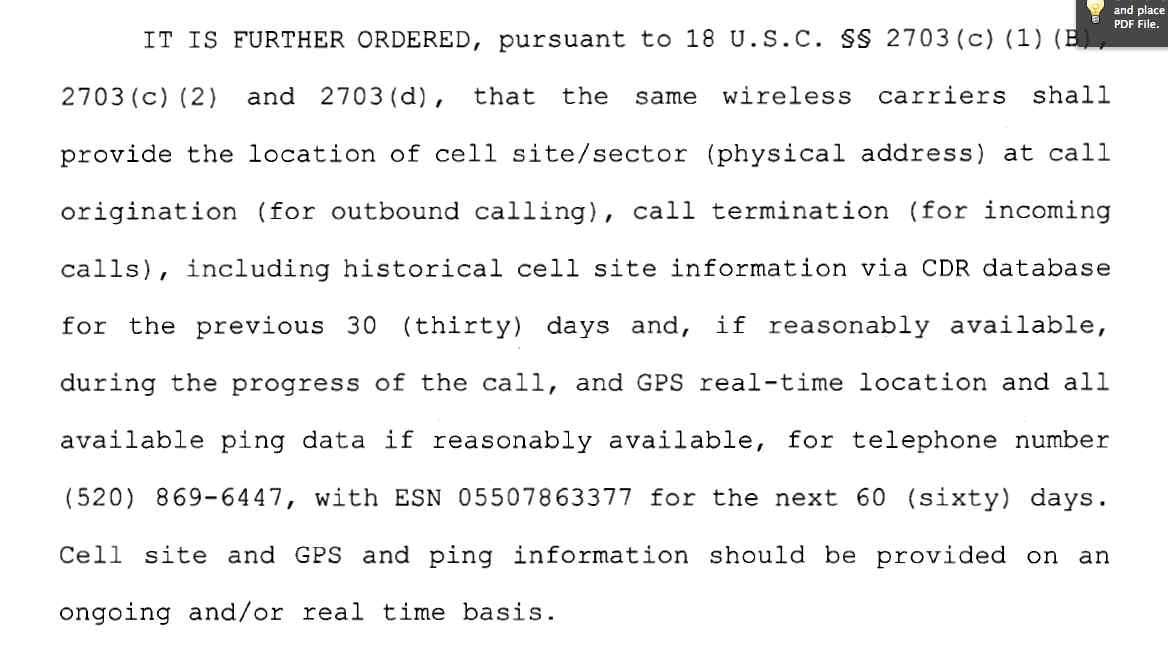 (This image may not be sizing correctly for some browsers.  If you’re not seeing well, you can view it here.)  As you can see, the order authorizes the government to get both cell-site and GPS information from the phone. So which did the government use when it “pinged” the phone? It’s somewhat hard to tell, because the magistrate judge’s Report and Recommendation refers to both GPS and cell-site and doesn’t focus much on the distinction. At the same time, the fact section of the magistrate judge’s Report and Recommendation refers primarily to GPS information, not cell-site data. Here’s the critical section, available at United States v. Skinner, 2007 WL 1556596 (E.D.Tenn. 2007):

Agent Lewis was given

No, concludes Judge Bennett in United States v. Graham (District of Maryland, March 1, 2012). Judge Bennett concludes that historical cell-site records are not protected because they fall under the third-party doctrine:

Like the bank records at issue in [United States v.] Miller, the historical cell site location records in this case are not the ‘private papers’ of the Defendants—instead, they are the ‘business records’ of the cellular providers. Federal law does not mandate that cellular providers create or maintain this type of data,11 and even courts that have concluded that government acquisition of cumulative cell site location records can violate the Fourth Amendment generally acknowledge that these records are ‘generated in the ordinary course of the provider‘s business.’ In re Application of the United States, 747 F. Supp. 2d 827, 841 (S.D. Tex. 2010) (Smith, Mag. J.), appeal docketed, No. 11-20554 (5th Cir. Dec. 14, 2011). Moreover, insofar as historical cell site records are created and maintained by the cellular providers, individual customers do not generally have access to those records, and could not be expected to produce them in response to a subpoena. Under the reasoning of Miller, therefore, historical cell site location records are the provider‘s business records, and are not protected by the Fourth Amendment.

. . .
Based on clear Supreme Court and Fourth Circuit precedent, this Court finds the third-party doctrine applicable to historical cell site location information. Like the bank records at issue in Miller, the telephone numbers dialed in Smith, and the subscriber information collected in Bynum, historical cell site location records are records created and kept by third parties that are voluntarily conveyed to those third parties by their customers. As part of the ordinary course of business, cellular phone companies collect information that identifies the cellular towers through which

On August 3, Magistrate Judge Susan K. Gauvey issued a fascinating opinion on this novel question: IN THE MATTER OF AN APPLICATION OF THE UNITED STATES OF AMERICA FOR AN ORDER AUTHORIZING DISCLOSURE OF LOCATION INFORMATION OF A SPECIFIED WIRELESS TELEPHONE, 2011 U.S. Dist. LEXIS 85638 (D.Md. 2011). Her answer: The Judge must deny the warrant application, as location information is broadly protected by the Fourth Amendment and government cannot use warrants to find out the location of people who have warrants out for their arrest. The timing of the case is extremely unusual, as it seems the case is moot and this is only an advisory opinion. If I understand the timing, Magistrate Judge Gauvey denied the application over a year ago, and the government was able to arrest the suspect some other way in the meantime. Judge Gauvey decided to hand down an opinion on the legal issue anyway, appointed defense counsel to argue for defense interests, and now, a year later, has handed down the opinion on why she denied that application [...]

A while back, I blogged at length about the Third Circuit’s pending case involving government access to historical cell-site records. The issue in the case is what legal standard the government must satisfy to obtain orders requiring phone companies to disclose such information. The district court had ruled that a warrant was required, and the government argued that the correct standard under the law was a “specific and articulable facts” court order under 2703(d) rather than a search warrant. Yesterday, the Third Circuit handed down its decision: In The Matter Of The Application Of The United States Of America For An Order Directing A Provider Of Electronic Communication Service To Disclose Records To The Government. In this post will explain the Third Circuit’s decision; try to figure out what it means (which turns out to be quite tricky); and then explain why I think it misreads the Stored Communications Act on an important point.

I. The Third Circuit’s Decision

The Third Circuit’s decision, written by Judge Sloviter, has three major parts. First, the court ruled that the government is right that under the Stored Communications Act, the government can obtain historical cell-site records under 2703(d) without getting a warrant. Second, the court agreed with amicus the Electronic Frontier Foundation that magistrate judges do not have to issue such orders. According to the Third Circuit, it is up to individual magistrate judges to make the decision of whether to issue the orders or else require a full probable cause warrant. Here’s the core argument:

Section § 2703(d) states that a “court order for disclosure under subsection (b) or (c) may be issued by any court that is a court of competent jurisdiction and shall issue only if” the intermediate standard is met. 18 U.S.C. § 2703(d) (emphasis added). We focus