A few months ago I bought an interesting 1865 letter on U.S. Supreme Court stationery: 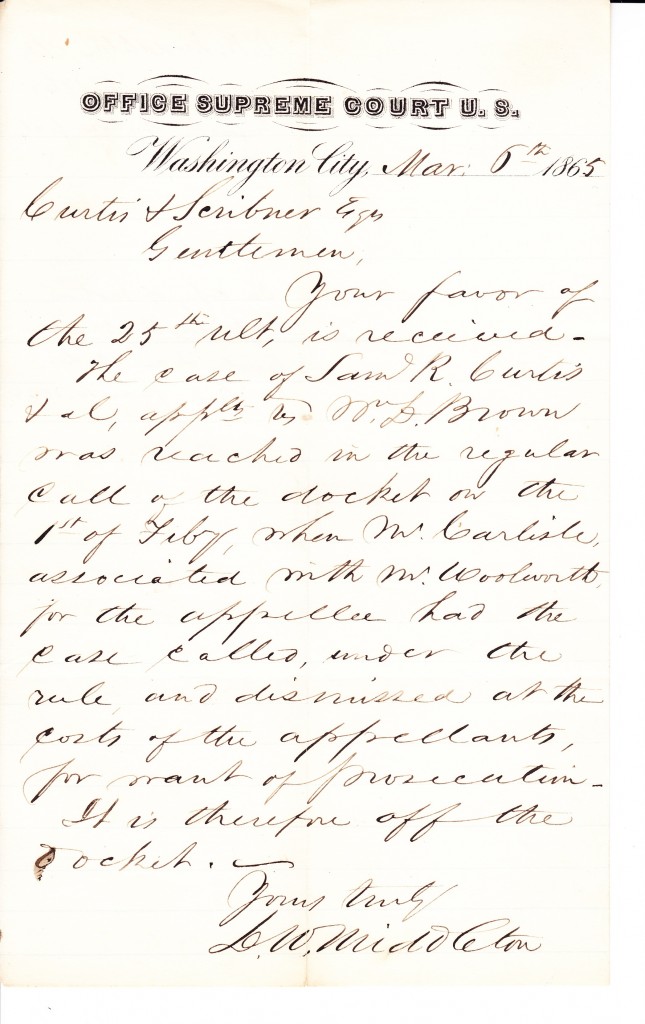 Here is what it says, as best I can tell:

Your favor of the 25th ult, is received.

The case of Sam R. Curtis et. al., applnts v. Mr. D. Brown was reached in the regular call of the docket on the 1st of February, when Mr. Carlisle associated with Mr. Woolworth, for the appellee had the case called under the rule, and dismissed at the costs of the appellents, for want of prosecution.

It is therefore off the docket.

In this letter, the court clerk responds to a law firm’s inquiry about a case. Specifically, the letter informs the firm that the case was dismissed when the appellants’ lawyers didn’t show up in court. The law firm had inquired about the case in a letter dated February 25th — “25th ult,” shorthand for 25th ultimo, or the 25th day of the previous month.

But what was the case about, and who were the people named in the letter? I did some hunting around, and here’s what I could figure out. The author of the letter is easily identified: D.W. Middleton was the Clerk of the Supreme Court from 1863 to 1880.

The named appellant, “Sam R. Curtis,” was Major General Samuel Ryan Curtis, a Union general who months earlier had led his troops to a decisive victory over the Confederates in The Battle of Westport.

The “Mr. Carlisle” mentioned in the letter was James Mandeveille Carlisle, one of the premier Supreme Court advocates of his day. A Centennial History of Washington DC published in 1892 reports that “for many years [Carlisle’s] practice was almost confined to the Supreme Court, and it is not saying too much to say that no lawyer ever more completely won and held the esteem, confidence, and respect of that great court than did Mr. Carlisle.”

The key part of the picture I couldn’t figure out, unfortunately, was the nature of the underlying case. I looked through the “allcases-old” database on Westlaw, and I couldn’t find any references to the case in either state or lower federal courts. Oh well. Still, kind of fun for $10 on eBay.

UPDATE: Andrew Hyman has figured out the mystery about the underlying case: see his comment here. Thanks, Andrew, for the excellent sleuthing.

A Small but Telling Example of Government Waste
Will States Challenge the “Nebraska Compromise”?